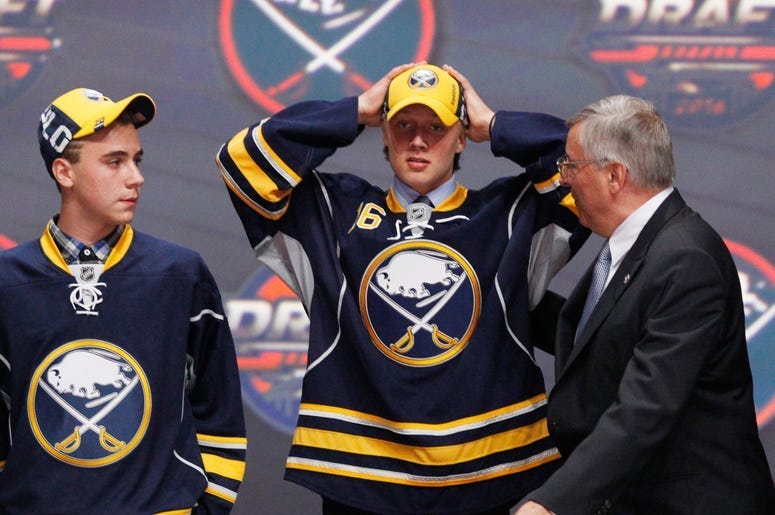 The NHL Draft lottery is Friday night and even though the Sabres odds are remote to draft in the top three, it feels as important as ever that the lottery balls fall right. The Sabres have a 6.5% chance at the first pick, a 6.8% chance at pick two, and a 7.1% chance at pick three.

Should the Sabres land one of the top three picks, they'd have what would likely be an impactful franchise player. Alex Lafreni?re, Quinton Byfield, and Tim St?tzle would be as good a start as it gets for new GM Kevyn Adams.

However, the chances are the Sabres will be picking between seven and nine. The odds of that are roughly 79%. Should that be the case, Adams will need to do a lot better at selecting than his predecessors.

In the first round, where you have to hit on your pick, there have been too many misses in recent Sabres memory.

It really starts in 2012. Darcy Regier, on thin ice, took a chance on a polarizing Russian center named Mikhail Grigorenko. Big stats in juniors and filthy hands made fans excited. Then he showed up and everyone realized he couldn't skate. The Sabres selected a center that never had any business being selected 12th overall with his skating ability.

Two picks later, Regier traded up to selected Zemgus Girgensons. It seemed like a home run early. Girgensons showed well in his first years turned pro. Many thought he had the makings of a future captain. Fast foward a few years, and the 14th overall pick has become a bottom six role player. I'd consider that a miss.

The next year, in 2013, a pick was made that can be debated as much as the player has been himself. I don't believe Rasmus Ristolainen is the type of player you should be hoping for with an 8th overall pick. You want defensemen, also drafted 8th overall in later years, like Zach Werenski of the Blue Jackets and Quinn Hughes of the Canucks. Ristolainen is an overused, second pair defenseman, who is a trap that every coach falls into.

Luckily for Ristolainen, it's hard to label him a bust when so few great players were picked after him. Would it be nice if the Sabres had Bo Horvat or Max Domi instead? Sure, but that's about it in terms of guys picked immediately after.

Then comes Nikita Zadorov. A very similar style of defenseman to Ristolainen. Luckily for Zadorov, he found a team that put him in the role that best suits him. I'm not going to call Zadorov a bad draft pick, nor will I Ristolainen, but you should want better for having two firsts in one year.

In 2016, Tim Murray, in the midst of building a team that had no promising young defenseman, selected winger Alexander Nylander. In three years, Nylander never made the Sabres on a full time basis. Meanwhile, both Mikhail Sergachev and Charlie McAvoy went from promising prospects to great young defensemen in the NHL. A complete whiff of a selection.

Throw in a huge question mark in Casey Mittelstadt, and getting little value back for Joel Armia, and you have a decade of Sabres first round picks that's produced just three impact players, and they were gimmes. Eichel, Dahlin, and Reinhart all in the top two picks.

Looking back through the last decade of Sabres draft past the first round is not a pretty sight either. From 2010-2016, seven out of 59 draft picks have played over 82 games for the team. Of those seven, just two came outside of the first round. Jake McCabe in the second round and Linus Ullmark in the sixth round of the 2012 NHL Draft.

The Sabres have had no pipeline of prospects, outside of first rounders, coming up and making an impact on the NHL team. That needs to change.

At this point, that pipeline doesn't exist. It's all hopes and prayers.

The Kevyn Adams' hiring has been criticized due to lack of experience, but when it comes to drafting, he couldn't do much worse than his predecessors. What the hockey department looks like surrounding him once the draft finally comes is very much up in the air, but it's not looking good for Adams getting much help. Here's to hoping he gets a head start on Friday night.