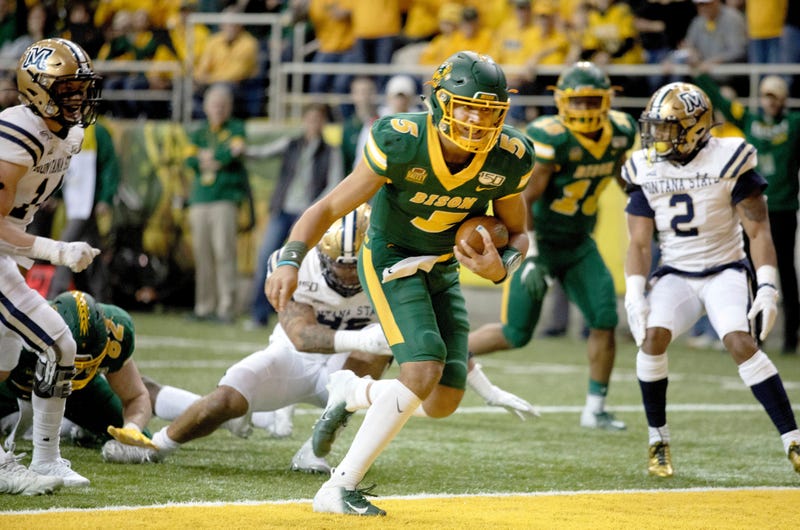 Photo credit FILE - In this Dec. 21, 2019, file photo, North Dakota State quarterback Trey Lance (5) scores a rushing touchdown during the first half of an FCS playoff NCAA college football game against Montana State in Fargo, N.D. All but a few teams in the Football Championship Subdivision shut down in the fall because of the COVID-19 pandemic and will play a spring season culminating with the NCAA playoffs in April and May. (AP Photo/Bruce Crummy, File)
By The Associated Press

One college football season just ended, and another one starts in just over a month.

All but a few teams in the Football Championship Subdivision shut down in the fall because of the COVID-19 pandemic and will play a spring season culminating with the NCAA playoffs in April and May.

As has been the case across the sports landscape for months, nothing is set in stone and more than 20 FCS programs — including all eight in the Ivy League — are not playing spring football at all.

Defending national champion North Dakota State is supposed to open its season five weeks from Sunday against Youngstown State. At least that what it says on the Bison's football website.

But the Missouri Valley Football Conference, the league the Bison play in, was thrown for a loop when Indiana State announced this week it would opt out. The Sycamores didn't cite concerns about the virus. Instead, they said they want to avoid the physical toll of playing next fall so soon after the spring season.

So for NDSU, that game against Youngstown State might or might not happen on Feb. 21. The Bison should know in a week or so.

“We are doing a complete redraw of the schedule,” Valley associate commissioner Mike Kern wrote in an email Friday.

The Ivy League has scrapped football until the fall. A look at the rest of the FCS conferences:

Big South: Five teams will play a four-game conference schedule starting March 13, and each will be allowed to play up to four nonconference games. Campbell and North Alabama each played four games in the fall and will opt out, as will Hampton, which did not play in the fall.

Ohio Valley: Eight teams will play a seven-game conference schedule starting Feb. 21. Each team can play one nonconference game Feb. 13 or 14. Eastern Kentucky opted out after it played nine games in the fall.

Pioneer: The schedule is being redrawn after Dayton opted out this week. Originally, nine teams were to play a six-game conference schedule starting March 13.

Southern: Nine teams will play an eight-game conference schedule starting Feb. 20. Chattanooga, Mercer, The Citadel and Western Carolina played between one and four games in the fall.

The NCAA playoffs are April 18-May 15, with 16 teams instead of the usual 24. Eleven teams will automatically qualify as conference champions. The remaining five will be at-large selections.

Schools that played in the fall and also in the spring will have all their results considered in the selection process.