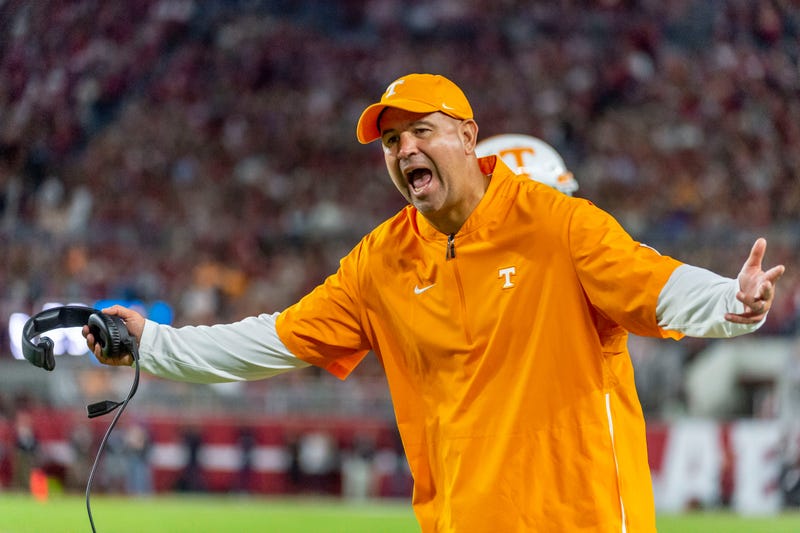 The Tennessee football program is starting over yet again, this time after coach Jeremy Pruitt and nine others were fired Monday for cause when an internal investigation found what the university chancellor called “serious violations of NCAA rules.”

Chancellor Donde Plowman said Pruitt was responsible for overseeing the program. Tennessee has been conducting an internal investigation since a tip Nov. 13 into allegations of recruiting violations.

Also fired were two assistants and seven members of the recruiting and support staff.

“While the investigation is continuing the information provided to us indicates serious violations of NCAA rules," Plowman said. "They occurred. These serious infractions warrant immediate action.”

The Volunteers went 3-7 last season. Pruitt’s firing means Tennessee will be looking for its fifth different coach since the Vols last won the Southeastern Conference Eastern Division title in 2007.

The chancellor said the potential NCAA issues involved Level I and II violations with a number of people and incidents. Plowman said she did not know how many violations or other specifics. NCAA investigators opened a case in December and became more actively involved within the past 10 days.

“It was stunning, the number of people involved ... and the number of incidents," Plowman said. "And so, yes, that was shocking. That’s partly what you see in the level of the actions that were taken today.”

This means Tennessee will not be paying Pruitt a $12.6 million buyout after he went 16-19 in three seasons.

“His termination was for cause, which means no buyout,” Plowman said.

The Vols played an SEC-only season in 2020 and each loss was by double digits. Tennessee had been picked to play in the Liberty Bowl but withdrew a day later after a batch of positive COVID-19 results, including Pruitt.

“We’re looking for someone who is a strong leader, who has principles and values, who also has experience in hiring coaches, and who can help us look to the future,” Plowman said. “We’ve got a great future here. As disappointed as we are, we’re determined to get this right.”

Boyd made clear that anyone who can't win “the right way” doesn't belong at Tennessee.

“If there is anyone in our athletic department in Knoxville or elsewhere who hasn’t heard that message yet, you’re hearing it now,” Boyd said.

Fulmer said he always expected to move on from athletics sooner than later, and the timing makes sense now so a new athletic director and coach can work together. Fulmer also said he thinks the program went from “quite a mess” to having “lots of good things” that have happened.

“This is very unfortunate in the sense that we’re going to have to work really hard to keep it from setting us back,” Fulmer said.

Kevin Steele, hired last week as a defensive assistant coach, will act as the acting coach. Plowman and Fulmer planned to meet with the football team later Monday. The next national signing day is Feb. 3.

Pruitt ends a tenure that started after a tumultuous coaching search highlighted by Tennessee replacing John Currie as athletic director with Fulmer.

The first-time head coach guided Tennessee to an 8-5 record in his second season capped by a Gator Bowl win over Indiana. That earned Pruitt a contract extension and raise. The Volunteers opened the 2020 season ranked 16th and extended their winning streak to eight straight.

Tennessee wound up matching the longest skid in program history losing six in a row. Pruitt fired defensive line coach Jimmy Brumbaugh in October only months after hiring him, and the former defensive coordinator took over the defensive line.

Tennessee wrapped up the season with a 34-13 loss to No. 5 Texas A&M. Before kickoff, a Knoxville radio station reported Tennessee and the NCAA were looking into recruiting issues. Leading rusher Eric Gray didn’t play and Pruitt said he was “unavailable.”

Tennessee fired Derek Dooley in November 2012 after a 15-21 record in three seasons, which included losing 14 of his final 15 SEC games. Butch Jones lasted nearly five seasons before being fired in November 2017 after losing for the fifth time in six games, and he had a 34-27 record, 14-24 in the SEC.