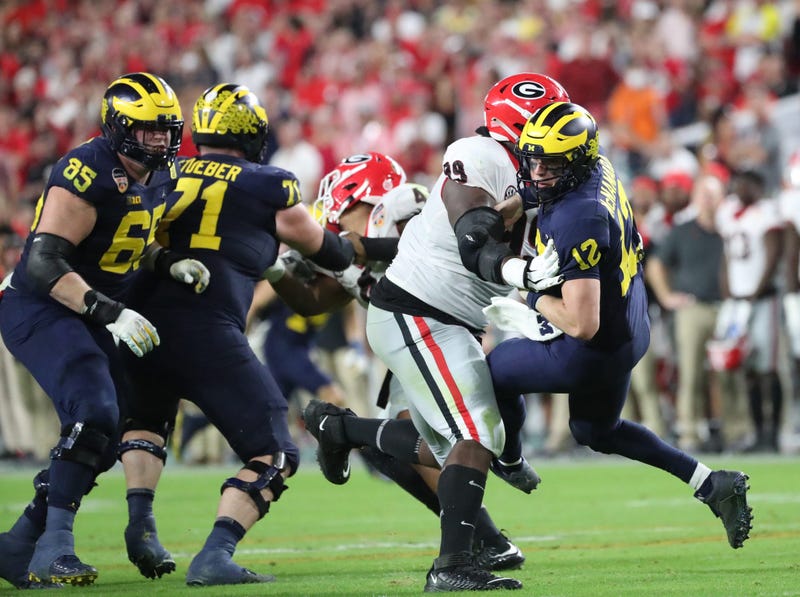 Georgia looked down right unbeatable on Friday night. The nation watched in primetime as the Bulldogs destroyed Michigan 37-11 in one of the CFP Semifinal games. Georgia came out with a chip on their shoulder following a loss in the SEC Title game to Alabama. The Bulldogs looked to prove a point and they did early on. There was no doubt Georgia was the dominant team. UGA came out of the gate strong, scoring 14 first quarter points and putting Michigan away early. The Dogs built an insurmountable led in the early going and led 27-3 at the half.

While Georgia's defense has been the story all season and were good again Friday night, the offense was a major bright spot. The defense created 3 turnovers as Georgia was +3 in turnover margin. On offense, QB Stetson Bennett had probably the best game he's ever had as Georgia's signal caller. Bennett went 20 of 30 passing for 313 yards, three TD's and no picks. He also ran for 32 yards on 3 carriers, a couple of those were scrambles that picked up 1st downs and kept drives going.

Georgia controlled the ground game, as they rushed for 190 yards and held Michigan to 91 yards on the ground. The Bulldogs averaged over 5 yards per carry and allowed just over 3 yards per tote. In the passing game, Georgia had 9 different receivers catch a pass and four different ones with a TD catch. James Cook was a difference maker for UGA catching 4 passes for 112 yards and a TD. Brock Bowers, Jermaine Burton and Adonai Mitchell all had TD catches as well.

While Michigan was routed by Georgia, the Wolverines had their best season in decades. It was the first time Michigan was in National Title contention on New Year's Eve since the 1997 season. That year subsequently was their last National Title. Jim Harbaugh has now broke the glass ceiling that separates the upper echelon teams from everyone else. The question moving forward is can he sustain the success and duplicate the feat and how soon?

The Georgia National Title drought sits at 42 years, as we move into the New Year. To me Georgia has been the best team in the country during the season, with that said though Alabama has their number. Georgia now has the deja vu effect of playing Alabama not only again this season but in a rematch of the National Title game a few years ago. At this point, the question remains whether Georgia can clear the mental hurdle. The other question is can Kirby Smart and his staff keep from getting outcoached like they normally do by Nick Saban and his staff? We will find out January 10th when the two programs meet for the Natty.