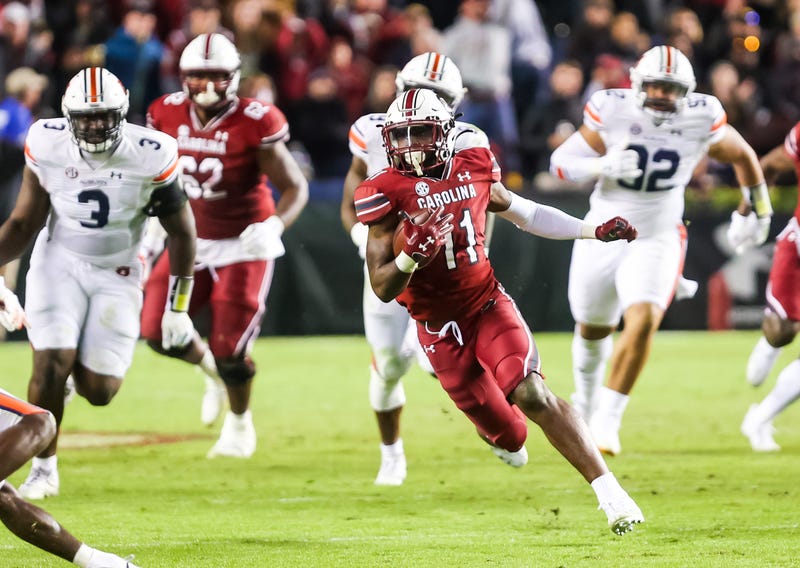 It was history in the making Saturday night as Williams Brice Stadium in Columbia. For the first time in program history, South Carolina has won back to back games against Auburn. The Gamecocks showed poise and resiliency by weathering an early storm. Credit Auburn for being ready to play, as they opened with as good a start as Coach Brian Harsin could've imagined.

It's hard to imagine that you would win a game in the SEC converting just once all night on 3rd down. However, South Carolina did that they also overcame a 22-15 Auburn advantage in first downs. Auburn got out to a 14-0 lead in the 1st quarter, they got a TD pass from back up QB TJ Finley to Demetrius Robertson to open the scoring. They then got a TD run from Tank Bigsby to cap a 61 yard scoring drive.

South Carolina answered with 6 minutes left in the 1st half. The Gamecocks got on the board on the first of 3 TD passes from QB Jason Brown. He found ZaQuandre White from 28 yards out to make it 14-7. White would carry the South Carolina offense throughout the night. He accounted for 168 total yards which was over half of South Carolina's total for the game. The turning point of the game came in the 2nd quarter. Auburn was up 14-7 and decided to go for it from their own 35 on 4th down. It was a head scratcher of a decision by Auburn Coach Bryan Harsin. I realize hindsight is 20/20 with them not getting the 1st down. However, I couldn't make any sense of the decision, you have the lead you have controlled the game mostly and it's the 1st half deep in your end? That decision gave South Carolina an open door with a shortfield. The Gamecock tied it up on Brown's 2nd TD pass. This time Brown found Abbeville Native Trai Jones, when the 300 pounder slipped into the flat and caught a 3 yard TD. That made it 14 all going into the half.

Auburn would re-take the lead 17-14 on a Ben Patton FG, that capped a 9 play 63 yard drive for the Tigers. South Carolina would then put together a scoring drive on their ensuing possession. Young QB Jason Brown was clutch finding Josh Vann for his 3rd TD pass of the game. More importantly, it was the go ahead score to give SC a 21-17 lead with less than 5 minutes left. The Gamecock defense would do the rest , as they held Auburn scoreless to preserve the win.

The loss brings up questions for Auburn. The biggest question is whether they made the right move, getting rid of Gus Malzahn and hiring Bryan Harsin. In his 1st year, Harsin is just 6-5 heading into the Iron Bowl against Alabama. He also has lost to South Carolina, which Auburn people will tell you was the "final nail" for Malzahn's tenure last season.

On the flip side, this win gives South Carolina back to back wins over Auburn for the 1st time ever. Keep in mind though, the two teams don't meet on an annual basis. South Carolina carries some late season momentum into the rivalry game with Clemson. There is no doubt South Carolina has been better at home then on the road. Five of their now 6 wins have come at home, they are 5-1 this season at Williams Brice. Their last two games at home they have edged Auburn and handled Florida. The Palmetto Bowl will take place under the lights in Columbia, it's a primetime game set for a 7:30 kick and will be nationally televised on the SEC Network.