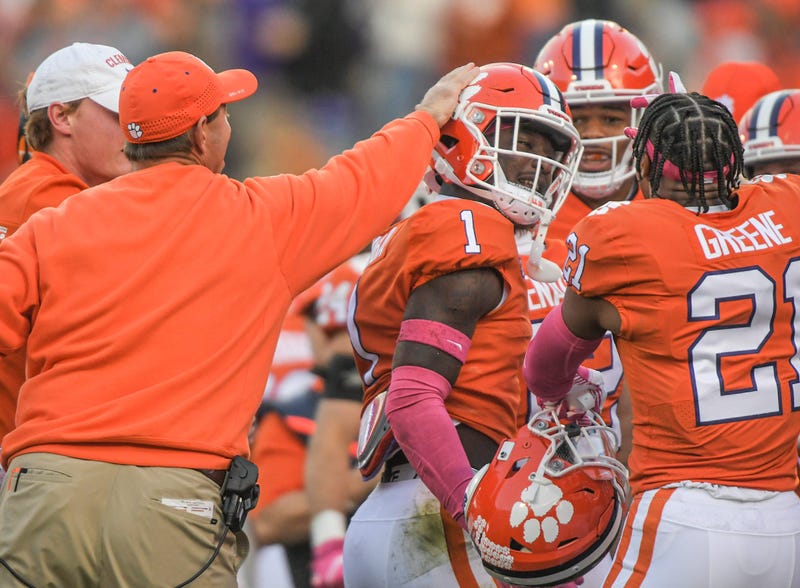 Clemson has been automatic at home, winning 31 in a row at Death Valley. It is the longest active home win streak in college football and tied for 3rd longest in this millennium. This Wake team is unlike any that I can remember in my25+ years of following college football and covering it in the media. Clemson is a favorite with most lines having them a 4 1/2 point favorite, despite Wake being ranked in the top 10. The Demon Deacons are 9-1 with their lone loss coming to UNC in a non-conference game. Wake has one win over a ranked opponent, as they downed N.C. State last week. Clemson is 0-2 vs ranked teams this year with losses to Georgia and Pitt (N.C. State was unranked when they beat Clemson).

It is important to note Clemson is 2-8 vs the spread this season. This game sets up to be a major contrast in styles. It will be strength on strength, as Clemson's defense which has performed well all season matches up with Wake's prolific offense. Clemson is #1 in red zone defense, #3 in scoring defense, 17th against the run and 19th in 1st downs allowed. Wake's offense is 2nd in scoring at nearly 45 points per game. They average nearly 500 yards of total offense, are 13th in first downs gained and 14th in passing offense.

A couple of key caveats stand out to me going into this one. I think 3rd down will be key and the team who wins the majority of the 3rd downs will have an inside track. Wake's offense is 6th in converting 3rd downs, Clemson is 20th in 3rd down defense. That is one side of the 3rd down battle, the other is Clemson's offense. The Tigers are not in the top 50 in 3rd down conversion offense, they will have to get in favorable 3rd down distances and convert on 3rd down to keep pace.

In the modern era of football, QB play has become one of the most important factors at all levels. It's hard to imagine, Wake not having a major advantage at that position. Sam Hartman may not get the national hype he deserves, but he has been incredibly productive. Hartman has thrown for over 3,100 yards, 30 TD's and 8 Picks, he's completed 60% of his passes. Hartman also has 9 rushing TD's , so he's a threat to call his own number in the red zone. Clemson QB D.J. Uigalelei has not lived up to the lofty expectations surrounding him this year. He has thrown for just 1,700 yards, 8 TD's and 7 picks while completing 55% for an average of less than 6 yards per completion.

Clemson has owned the series both historically and recently. The Tigers have won 12 straight in the rivalry. Wake's last win in the series came in 2008. The Demon Deacons have beaten Clemson just twice since 2000. Both of those wins came in Winston-Salem. To find a Wake Forest win at Clemson, you have to go all the way back to 1998. The Tommy West era of Clemson Football was the last time Wake came to Death Valley and left victorious. History certainly is on Clemson's side. The season it has seemed like this is the year ACC foes know is their shot to knock Clemson off. The Tigers and Demon Deacons will kick it off at Noon in Death Valley.