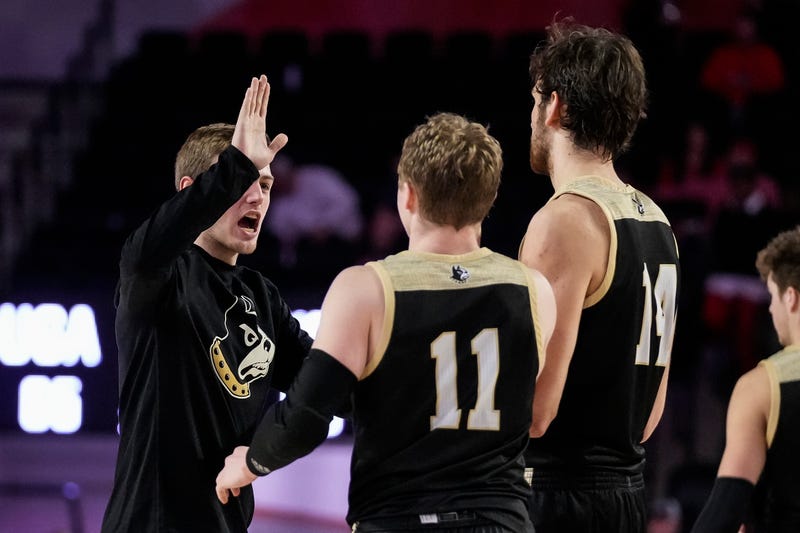 The Wofford men’s basketball team got a lift from its whole program in Wednesday evening’s midweek SoCon tilt with the visiting Samford Bulldogs, as eight Terriers scored at least five points, including four in double figures, while shooting a blistering hot 62.3 percent from the field to earn a dominant 87-64 victory at the Jerry Richardson Indoor Stadium. The win puts the Terriers back in the win column at 10-7 overall and 2-3 in the Southern Conference, as Samford drops to 11-5 and 1-3 in league action.

Head coach Jay McAuley was unavailable for Wednesday’s contest due to COVID-19 health and safety protocols, as associate head coach Dwight Perry served as Wofford’s interim head coach for the night in the win.

“This was a phenomenal program win,” said Perry of the Terriers’ performance in the crucial home victory. “This is what Wofford basketball has always been. Coach McAuley preaches it and this is what Wofford basketball will continue to be. A great team effort by guys that might not necessarily play a whole lot of minutes, or any minutes at all certain games, and it was just great to see. Just happy for the guys. They deserved it.”

A team that looked more reminiscent of itself on Wednesday night, Wofford hit 33-of-53 from the floor (62.3%), marking its second-highest field-goal total and percentage achieved in a game this season, while cashing 11-of-23 from beyond the arc on the night (47.8%). The Terriers also held steady from the free-throw line at 83.3 percent on 10-of-12 attempts for the contest.

For the ninth game this season, Wofford had at least three players hit two or more 3-pointers, while having hit 10-plus threes as a team for the third time in the last five games.

Additionally, after coming off a 19-turnover outing at UNCG on Monday, the Terriers recorded a season-low four turnovers to 12 assists – marking the lowest turnover output since doing so in an 89-61 win against High Point on Nov. 9, 2019.

B.J. Mack led all scorers in double figures with a game-high 18 points on 7-of-12 shooting and 4-of-5 from the free-throw line, his third straight contest leading the Terriers in scoring, while also recording five rebounds and two assists.

“It was a great team effort,” said Mack of the Terriers’ second SoCon win. “Coach was preaching to us to do team scores and team stops, and that’s what we went out and did.”

Max Klesmit followed with 16 points, including 3-of-6 from beyond the arc, three rebounds and a game-high three steals – currently tabbed second in the SoCon for steals (1.9/g). Isaiah Bigelow and Morgan Safford each tallied 10 points apiece, both hitting two threes each, as Bigelow pulled down a team-high six rebounds.

Ryan Larson recorded nine points on 3-of-7 from deep range, in addition to a game-high five assists with zero turnovers, as freshman guard Luke Turner also tallied nine points – a season and career-high in league action – on 4-of-6 shooting in 17 minutes off the bench.

Classmate Austin Patterson added six points in 29 minutes, as senior center David Appelgren provided a fascinating spark off the bench with five points, three rebounds and a block in 14 minutes.

“Dave’s been doing great,” added Mack of Appelgren. “Every day in practice, he’s been helping me, Sam [Godwin] and Messiah [Jones], when he was out there playing, and he’s just been every day working, working, working and I’m happy to see him shining.”

“It was a great team win against a really good team,” said Appelgren. “We came out and played together and everybody was ready when it was their turn called.”

At 47-42, Klesmit would convert an and-one layup before burying a pull-up three to reclaim a double-digit spread at 53-42. Larson nailed a three to follow, as an Appelgren free throw capped a brief 10-2 run to lead by 13 at the under-12 media 57-44 (11:52). At 59-48, Wofford would rattle off another 9-0 spurt after Larson dimed Morgan Safford for a three from the right wing (62-48). Klesmit free throws ensued next, as a Luke Turner mid-range jumper and David Appelgren hook on the right block then pushed the lead to 20, 68-48.

The Terriers continued to pump the scoring volume, as Larson would cash another three, prior to Mack free throws and a Turner reverse finish under the rim pushing a 23-point margin with 5:43 left, 77-54. From there, both teams would trade scores, seeing Wofford’s advantage balloon to 24 points twice after a Klesmit layup at the rim and Isaiah Bigelow 3-pointer from the left wing, 84-60. Luke Turner would go on to put the finishing touches on the game, drilling a three right in front of Wofford’s bench with 1:25 remaining to close out the scoring and finish with the 87-64 win at the horn.

Wofford (10-7, 2-3 SoCon) looks to push a consecutive league victory this Saturday, Jan. 15, as the Terriers will travel to Cullowhee, N.C., for a 2 p.m. matchup at Western Carolina at the Ramsey Regional Activity Center.