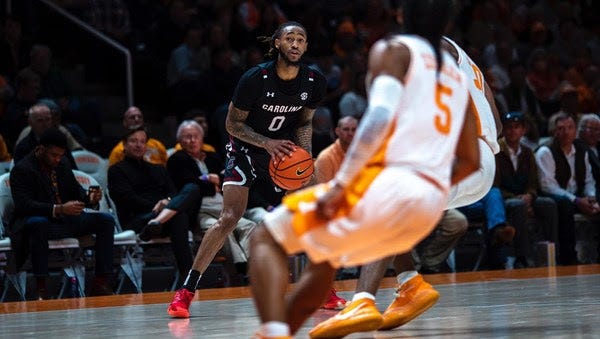 Santiago Vescovi scored 14 points to help No. 22 Tennessee overcome a sluggish start and beat South Carolina, 66-46 on Tuesday night.The Volunteers (11-4, 2-2 Southeastern Conference), missed their first five attempts and didn't hit their first 3-pointer until 2 minutes were left in the first half. The score was tied at 22 when Tennessee went on a 12-2 run that spilled over into the second half.

Charleston, South Carolina native Josiah-Jordan James had a double-double with 11 points and 12 rebounds to aid the Tennessee effort. James hit a 3-pointer at the buzzer to end the first half that gave the Vols a spark. Zakai Zeigler had 11 points and John Fulkerson added 10.

James Reese led the Gamecocks (10-5, 1-2) with 15 points, matching his season high.The Gamecocks turned it over 23 times, which marks their second-highest total on the season. Carolina turned it over 24 times on Nov. 14 against Western Kentucky.
Tennessee had an advantage in the paint, they outscored Carolina in the paint by a margin of 28-16. Erik Stevenson collected six rebounds to lead the Gamecocks, he also scored five points and is now just four points away from 1,000 career points.

Tennessee has won seven of the last eight matchups in the series with Carolina. The Gamecocks return home to host 9-5 Florida (9-5, 0-2 SEC) on Saturday, tip time is set for 1 p.m. at Colonial Life Arena vs. the Gators. The game is set to be televised nationally on SEC Network, Dave Neal and Jon Sundvold will be on the call.