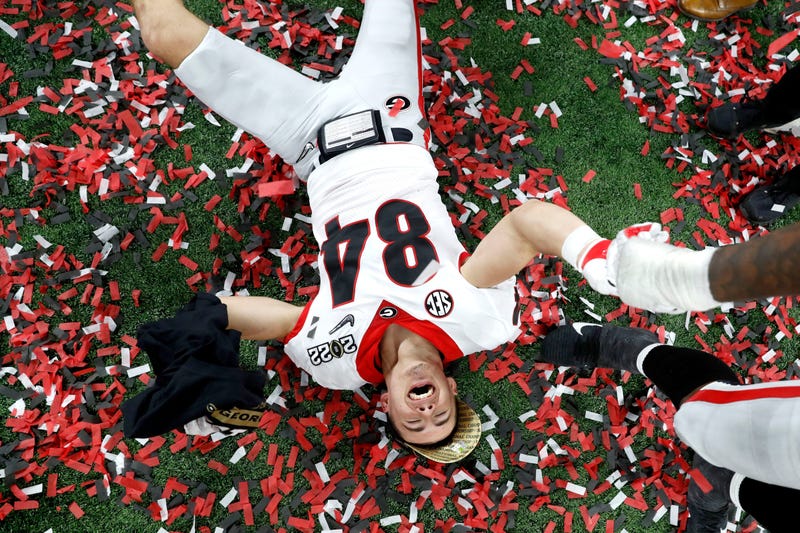 It was impossible to say anything other than a defensive war expected from these two national championship finalists in Georgia and Alabama.

The second half never mirrored the defensive effort in the first two quarters, and the Georgia Bulldogs have won the College Football Playoff 33-18 in an outing that was close until the last few minutes of the 60 allotted.

Fought like a "dogfight" until the very end of the fourth quarter, head coach Kirby Smart and the Bulldogs received a pivotal interception with 54 seconds remaining in the fourth quarter from cornerback Kelee Ringo to put Georgia up two possessions, virtually ending the matchup as soon as Ringo returned the interception for a touchdown on an errant Bryce Young throw, trying to make a big play happen late in the game.

After six points in the first half, Georgia scored 20 points in the fourth quarter alone to go with seven in the third. Smart finally wins one for his alma mater after heartbreak struck at the hands of (at the time) freshman Tua Tagoivailoa in overtime when the Tide was down 13-0 in the first half during the 2018 national title game.

Georgia quarterback Stetson Bennett, after a first minute UGA scoop-and-score was overturned, struggled to find his rhythm until later in the 60 at Lucas Oil Stadium in Indianapolis, but as they have in every outing not named the 2021 SEC Championship Game, the Bulldogs defense dominated in the second half holding The Tide to the same point total as the first two quarters.

Alabama out-gained Smart's Bulldogs 399-364 with the massive offensive difference coming through the air -- Young's passing stats aside, a 140-30 yard difference for Georgia's running game made all the difference. Bulldog running backs Zamir White and James Cook had 19 total carries for 84 yards and 77 yards, respectively. Alabama's Brian Robinson Jr. ran for 68 yards on 22 attempts. Still, sacks on Young negated most of Robinson Jr's talent, which was on full display against Cincinnati in the semifinal college football playoff game.

With head coach Nick Saban and Alabama off the top of the totem pole yet again, what does this mean for the future of college football? Does Georgia's win even matter in the grand scheme of elite programs?

For an outstanding recruiter in Smart with even better recruiters surrounding him on staff (i.e., Will Muschamp), the answer is simple: absolutely.

Was Saban's 2021-2022 Tide team the youngest of his tenure? Sure. But Smart now has the metaphorical monkey (Saban and Alabama) off his back.

There will forever be less stress for Smart heading into future rematches of tonight's title game, now that one of the outcomes belongs in Athens, along with a College Football Playoff trophy to boot.

Alabama's recruiting hasn't taken a major dip after previous title game losses and surely won't this time considering the circumstances of youth -- but the gap has been closed. It's always vital to prove the previously thought to be unbeatable is vulnerable after all, even in a media-shouted "down year."

Georgia finished fourth in 2021's 247 Sports composite recruiting rankings and can only move forward from next year from a fourth-place finish. Despite elite losses like defensive tackle Jordan Davis, Smart returns just as much talent in 2022 -- likely leading to a post-game locker room talk already discussing the capabilities of this Georgia team moving forward in years beyond.

As mentioned, Saban and Alabama aren't disappearing over an offseason.

Saban finished first in national recruiting rankings for the 10th time as head coach and will have a much more experienced Tide team with a returning Heisman Trophy winner coming off the biggest loss of his life under center.

Undoubtedly, every division one football player residing in Tuscaloosa won't let this go until they get their revenge opportunity in the same light as Smart did tonight.

Revenge wanted or not, Smart can now coach any game against Saban, knowing whatever the result turns out to be, he will always have a national title trophy in Athens with Saban's name on the losing side.