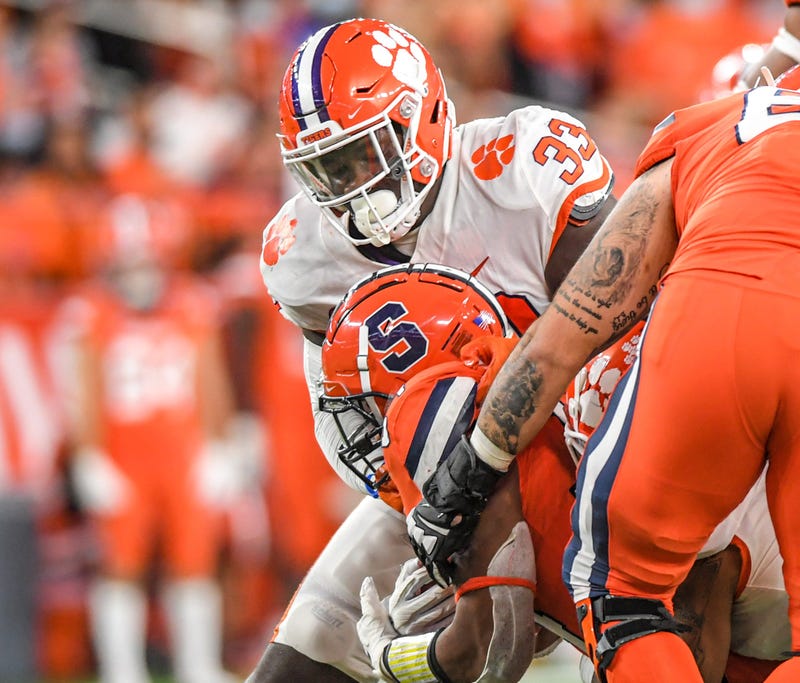 Road games in college football are always a difficult task. That situation becomes increasingly difficult when the game is on an odd day. This past Friday's road trip for Clemson proved to be a dicey proposition, even more so than was expected by oddsmakers. In the end, a late missed FG seal Syracuse's fate and gave Clemson a 17-14 win.

Neither team could find much offense early on and the game was a scoreless tie after the 1st quarter. Clemson struck first when they got a TD pass from D.J. Uiagalelei to Joe Ngata from 19 yards out. That capped a drive that took nearly 7 minutes and went 87 yards on 12 plays. That gave Clemson a 7-0 lead.

The Clemson offense would sputter in the second half. They found their lone points after the break on a 3rd quarter field goal. That Clemson lead extended to 10 at 17-7 following a 40 yarder from B.T. Potter. Syracuse would score to make it interesting with just over 7 minutes left. The Orange got a big play in the passing game, a 62 yard strike to Trebor Pena made it 17-14.

That set the stage for the drama filled finish. Syracuse drove late into Clemson territory in the closing minutes. However, their drive stalled and they had to try a field goal. The 48 yard attempt missed wide left to preserve another "ugly win" for Clemson.

Ultimately, a win is always better than the alternative. Clemson was outgained 356 to 314 in total yards. Syracuse had the advantage in the run game 165 to 116. Most of that was due to the play of Syracuse RB Sean Tucker, he finished with 157 yards on 22 carries. QB play was better for Clemson, but still not to the expected level. Uiagalelei was 21 of 34 for a 62% completion rate, he threw for 181 yards and a TD. The passing game again avergaed just over 5 yards per completion. Clemson used the TE on short passes consistently, as Davis Allen caught passes for 49 yards. They also got 5 catches and 51 yards from Ross. Ngata caught the lone Clemson TD pass but it was his only catch of the game.

Clemson moved to 4-2 on the season and 3-1 in ACC play. Syracuse falls to 3-4 overall and is still winless in league games. The Tigers three ACC wins have been by a combined 17 points. Clemson will have another tough road test this week. The Tigers go to Pitt Saturday for a 3:30 kickoff.