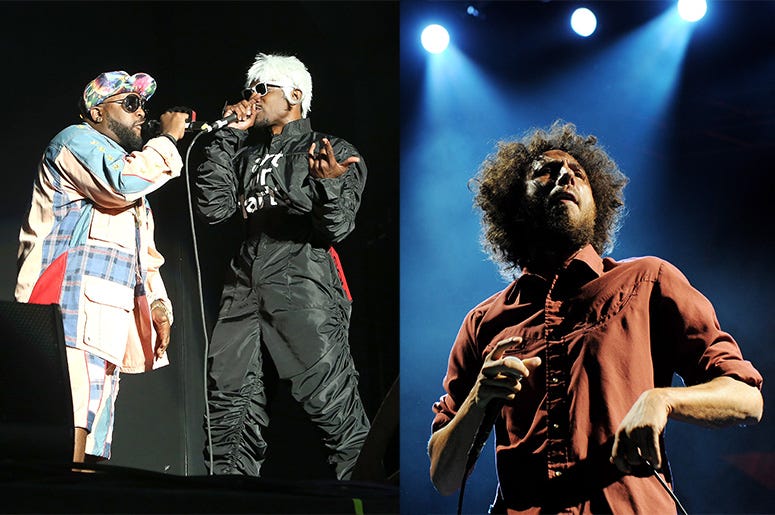 Outkast have dug deep into their remix treasure chest to reveal Zack de la Rocha’s take on the 2000 classic “B.O.B. (Bombs Over Baghdad).”

It’s all part of the rap duo celebrating the 20th anniversary of their landmark album Stankonia. Big Boi and André 3000 told Rolling Stone that Rocha’s eclectic sound gave their original work depth. “Zack added an extra layer of grunge to a masterpiece,” Big Boi told the publication. “I’m a fan of the Rage sound so it was an honor to have them involved in a remix,” André 3000 added.

The original track benefits from a frenetic pace of electronic rhythm and automatic lyrics. This latest version, remixed by the Rage Against the Machine singer, depresses the energy a few clicks in favor of stabbing guitars riffs, surprising each rap bar.

Unfortunately, de la Rocha’s remix never received a commercial release until now. It’s just one of the many songs included on the Stankonia reissue set to drop Friday, October 30.

Besides reliving the glory days of southern rap’s apex, André 3000 has been busy speaking out for social justice. The frontman launched a new t-shirt line meant to promote the Black Lives Matter movement. The shirts offer messages like “breathe.” “which type of stereo are you?” and “can one rest in peace & violence?”

In an Instagram post detailing information about the apparel, André says, “this is only one piece in the war against systemic racism. It takes all of us. BLACK LIVES MATTER…”

Something very important is happening all over the world and it is happening to all of us. How does it make you feel? For 3 days, a selection of shirts inspired by a collection of my jumpsuits will be sold and 100% of net proceeds will be donated to Movement for Black Lives @mvmnt4blklives to aid in their fight to end police brutality & racial injustice against Black people. This is only one piece in the war against systemic racism. It takes all of us. BLACK LIVES MATTER … at a minimum. - 3 Link in bio #blacklivesmatter #defendblacklives