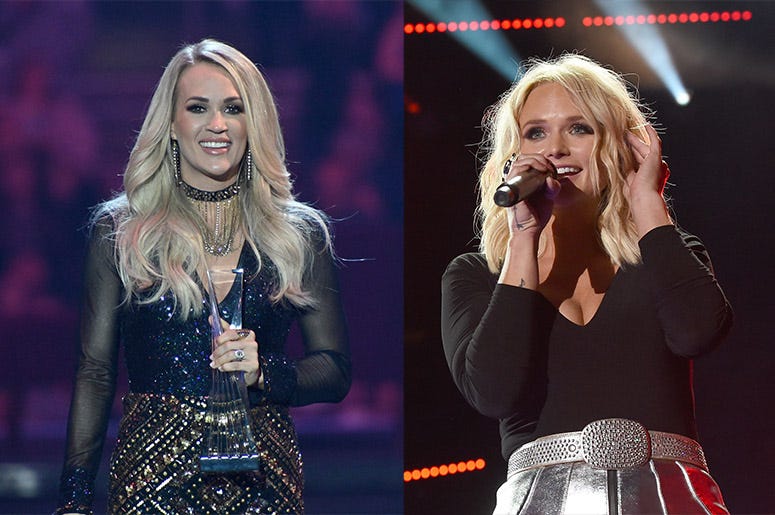 Country music’s biggest night is fast approaching and fans are eager to find out who wins Female Vocalist of The Year at the 54th annual CMA Awards.

The annual event broadcasts to homes across the country November 11, on ABC, with Music City Center in Nashville, TN as a backdrop.

2020 has seen the emergence of powerful female artists dominating Country music like never before. Check out a complete list of these nominees and recognize greatness when you hear it.

Will Carrie Underwood add to her 2020 awards show haul? Can Maren Morris ride her immense cross-genre popularity to a big night? How will Miranda Lambert replace that bluebird in her heart with a trophy?

As we countdown the days to the 54th annual CMA Awards, we want to hear from you. Cast your vote below on who you think will win the Female Vocalist of The Year.

By now we've all fallen in love with Miranda's cool cop husband Brendan McLoughlin, but her "Bluebird" video captured the imaginations' of Country fans all over the world. Lambert is still riding high off her LP, Wildcard, and we can't wait to see what's next.

Anticipation was at a fever pitch for Ashely's sophomore album Never Will when it dropped in April. Much of the acclaimed album projects a dark and defiant sound with heavy energy and flow. No single exemplifies that better than "Martha Divine."

Was there anyone more talked about in the last year than Maren Morris? Not only did she net the ACM Female Vocalist of the Year award, but her third single from the album Girl keeps climbing country music charts.

The "Rainbow" singer took home Album of The Year in 2018 for Golden Hour, but hasn't released a studio album since. Instead, she focused on other creative endeavors like a 2019 Christmas special and special appearance in an episode of Scooby-Doo and Guess Who?

It's Carrie Underwood, ok? Excluding her for any awards conversation should be a federal crime. She's a treasure! After tying for the award at a show earlier this year, the "Cry Pretty" singer might walk away with one all to herself this time around.

Now the choice is yours. Vote for who you think should win Female Vocalist of the Year at the 2020 CMA Awards, and be sure to tune in Wednesday November 11 at 8PM ET on ABC.