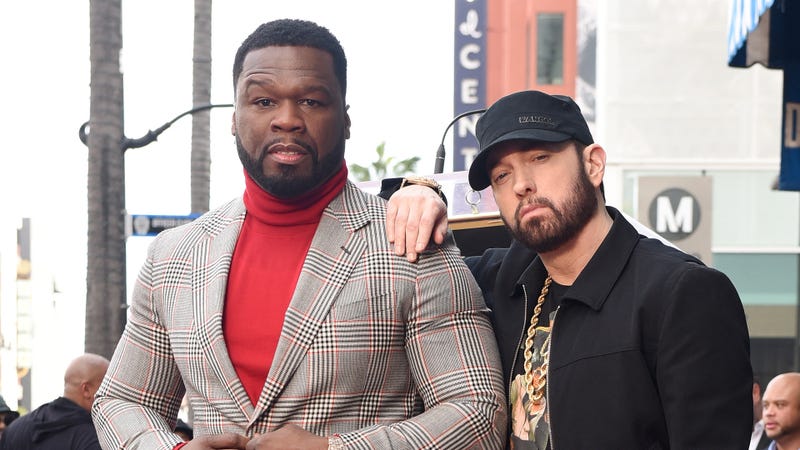 Amongst discussing the Super Bowl halftime show, the origins of “In Da Club,” and his infamous ceremonial first pitch at a New York Mets game, during a recent interview with Big Boy’s Neighborhood, 50 Cent revealed that he and Eminem are working on bringing 8 Mile back. And while this time it's to the small screen, “it’s gonna be big.”

Apparently after sharing the stage during the Dr. Dre-led Super Bowl halftime show, the duo was in early talks for a one-off concert idea for the world's biggest sporting event. And though that quickly shot down, it led the two rappers to find another way to work together. “I’m gonna bring his '8 Mile' to television,” 50 Cent revealed.

While 50 didn’t really get into the level of Eminem’s involvement, he did share that the pair’s idea is “in motion.”

No stranger to hit TV shows, 50 went on to say, “It’s gonna be big. I’m working. I ain’t got no duds. I’m battin’ a hundred,” he added, alluding of course to his Power franchise and spinoffs on STARZ, not to mention his new series BMF. The first season of which actually featured a guest appearance from Eminem.

Describing his vision of 8 Mile TV series reboot, the movie of which told the semi-autobiographical origin story of Eminem, 50 Cent said, “It’s a modern version. Think The Fresh Prince of Bel-Air,” referencing Peacock’s present-day, dramatic retelling of the hit Will Smith sitcom. “I think it should be there for his legacy, because if you don’t see… it’s important to me that they understand it.”

“I wanna be able to show and offer a lot more details,” he added. “Things that you would say in an interview or different things that you’ve already used, that you put out there, and stuff like that. You’ll see those things kind of surface and the temperament of the characters.”

50 Cent is working on an "8 Mile" TV series for Eminem’s "legacy"https://t.co/52WCdDsvQr pic.twitter.com/XKboejYcdj

Listen to Eminem Radio and more on the free Audacy app