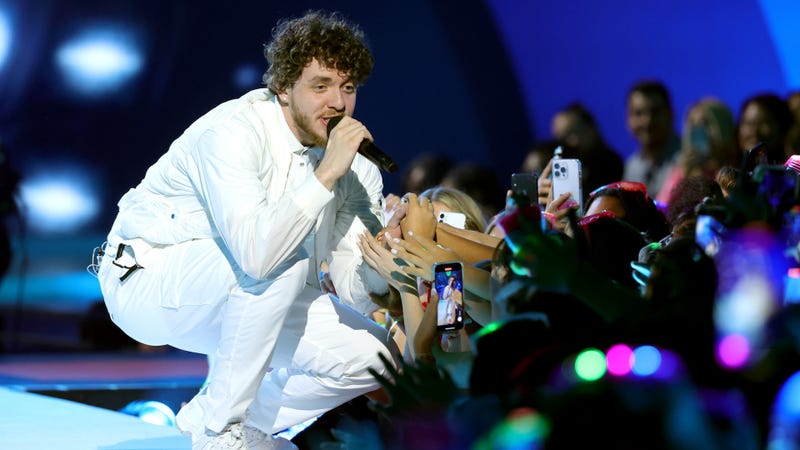 The past few years have brought a great deal of success to Jack Harlow. From humble beginnings in Louisville, Kentucky, Harlow is now a household name around the world. Recently he reached the number one spot on the Billboard Hot 100 with, “First Class.” Prior to this feat, he had one other number one hit as a feature on Lil Nas X’s, “INDUSTRY BABY.”

Harlow’s viral 2020 track, “WHAT’S POPPIN’” is credited with skyrocketing him into the limelight, with the song reaching number two on the Billboard Hot 100. In honor of his new album, Come Home The Kids Miss You, we’re taking a look into some of Harlow’s earlier tracks from his career that helped shape his musical style. Tune into Jack Harlow Radio to hear these tracks and more!

As the leading single off of Harlow’s 2018 mixtape Loose, “SUNDOWN” is a melodic track that illustrates the kind of boisterous events that transpire after the sun goes down. In an interview with Genius, Harlow said, “...what’s crazy about this record is, all growing up, I was never into drugs or drinking. All through high school I didn’t do it. I just wasn’t that intrigued. And then I remembered the summer after I graduated, a big group of my friends were doing that. And it was the first thing that ever made me like, ‘Dang. I want to do that’...‘Cause they were in such a euphoric state. So one night I just did it with them. And this is before I smoked or drank, ever. It’s the first drug I ever did. And it was a trip for sure.” The song was released the same day that Harlow announced he had been signed to DJ Drama and Don Cannon’s record label, Generation Now. At the time of the song’s recording, Harlow had been a fan of Hip-Hop artist Clipse whose 2006 album Hell Hath No Fury was co-produced by Pharell Williams. Don Cannon received permission from Williams for Harlow to sample HHNF’S introductory track “... We Got It For Cheap (Intro)” in “SUNDOWN,” giving the song its compelling and vivacious beat. As Harlow’s first official release as an artist on Generation Now, “SUNDOWN” helped the rapper reach new audiences and solidify himself as one to watch. The 2018 Harlow would be proud of how far he’s come; Pharell is featured on Harlow’s new song “Movie Star” off of Come Home The Kids Miss You.

Harlow has maintained an impenetrable confidence since the beginning of his career. Off of his second mixtape Gazebo, “Dark Knight'' reflects the momentum Harlow was building in 2017 as an up-and-coming rapper in Louisville. Harlow’s longtime friend and frequent collaborator 2forwOyNE produced the song and gave the beat a dark and edgy energy. Harlow’s lyrical momentum mirrors the song’s beat, reaching a climax with Harlow’s final words, “Funny how it all works out, Right before I did this, I was feeling burnt out, Now the whole city 'bout to get burnt down.” Clearly Harlow never lost faith in himself and will always reign as Louisville’s Dark Knight.

“SYLVIA” is a sultry and addictive track where Harlow shows off his softer side while describing his “type,” rapping, “All my girlfriends like to be rebellious, Tattoos with the belly button ring, She a bad little 'ting, look just like a Sylvia.” Off of his 2018 mixtape Loose, the song features a rhythmic rap verse from 2forwOyNE, who is also responsible for the song’s hypnotic production. Harlow’s flow paired with 2forwOyNE’s production is a match made in heaven; the two have worked together since the beginning of Harlow’s career and have created some of the rapper’s greatest songs together.

“WARSAW” is an absolute bop. Off of his 2019 mixtape, Confetti, the song depicts Harlow and his team celebrating their success that followed Harlow’s signing to Generation Now. The song has a bouncy beat which Harlow glides over with lyrics like, “Y’all ain’t get to see what I foresaw coming, Now the team overseas in Warsaw, stuntin’.” Even with his newfound fame, Harlow never forgets his Kentucky roots and refers to his favorite hometown spots like Two Keys and Tin Roof throughout the song. The song’s music video was also filmed at a huge house party in Louisville, making it the perfect song to get any party going.

“DRIP DROP” is another early-Harlow gem. With a guest verse from Kanye West collaborator, Cyhi The Prynce, the song has a simple and moody beat that gives both rappers the ability to show off their lyrical skills. The music video features Harlow’s colorful personality as he wears a red beret and paints a portrait of a woman in front of him. Both rappers effortlessly ride this song’s silky beat and make it a truly addictive listening experience.