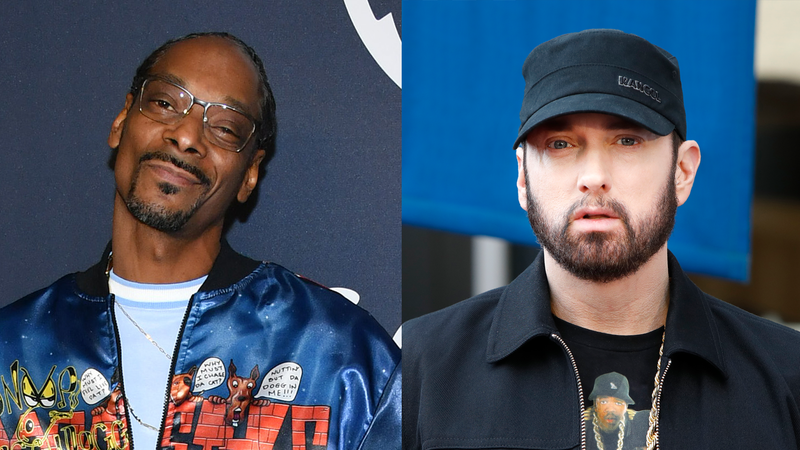 We already knew Snoop Dogg and Eminem buried their beef earlier this year. But you wanna know how/what Snoop did/said to make it happen?

During an upcoming episode of The Rolling Stone Music Now podcast, The Doggfather explained that he offered up his apologies to the Detroit rapper, saying that he was wrong to suggest that Em doesn't belong on his Hip Hop’s Top 10 list.

"I know how to call Marshall and say, man, I apologize," Snoop admits in the episode set to air on Friday October 29, which according to Rolling Stone will be available via podcast on November 3.

And while the conversation between the two rappers was a private one, as Snoop divulged, the gist of it was — "'I was wrong, bro. Do you forgive me?'"

Now the pair have even teamed up on an yet-untitled song slated to appear on the debut from Snoop's all-star Mount Westmore collective, which will also feature Ice Cube, E-40 and Too $hort.

"You got to understand we really love each other," Snoop tells the podcast. "So we don’t want the public to put a spin on something that’s not even that serious…. And we truly respect each other. So we wanted to get an understanding behind closed doors… We’re brothers, man. You know, my (real) brother hurt my feelings a lot of times — I wanted to join a gang and he wouldn’t let me!… You learn to understand and respect each other as brothers, as family members, and you respect each other’s opinions. And as long there was no disrespect directly or ill will, then it can all be forgiven and it can all be moving on."

Snoop also offered up some details about their upcoming track, which was recorded two months ago, promising that not only do Em's verses "slap," but he "really f***ing shot at me, he shot his shot. And as a rapper, that's what you want when you get a feature, to have to f***ing work your a** off…. And that’s what it is when you make records with people that you love and family. It’s competitive, but it’s competitive for the right reasons to bring the best out of each other."

So what else is next for The Doggfather, well his new project The Algorithm arrives next month. And for a bit of delayed gratification, Snoop will join Dr. Dre, Mary J. Blige, Kendrick Lamar and Eminem to perform during next year’s Super Bowl halftime show.