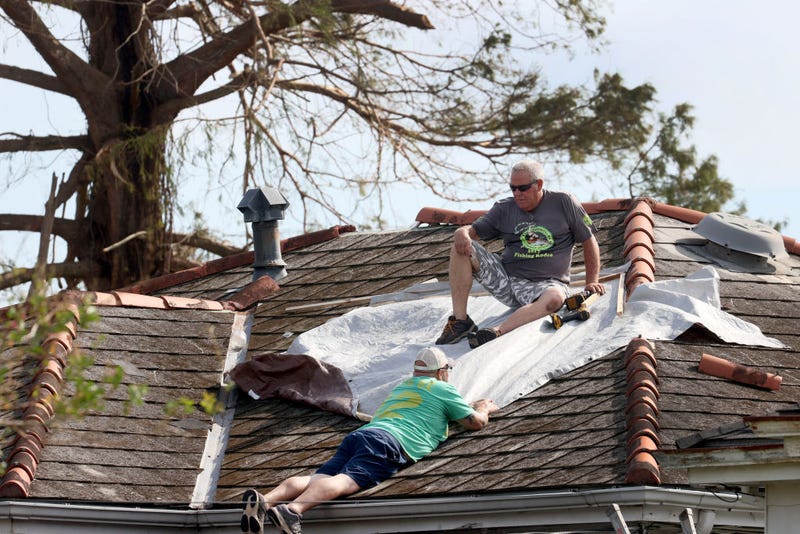 HOUMA, LOUISIANA - AUGUST 31: Workers put a tarp on a roof after it was damaged by Hurricane Ida on August 31, 2021 in Houma, Louisiana. Ida made landfall August 29 as a Category 4 storm southwest of New Orleans, causing widespread power outages, flooding and massive damage. Photo credit Scott Olson/Getty Images
By Chris Miller

Barely more than two weeks after Hurricane Ida, Tropical Storm Nicholas is drenching the area with rain, while many people still have roof damage that has not been repaired.

Louisiana Insurance Commissioner Jim Donelon tells WWL's Dave Cohen, this provides an example of why it is important to file an insurance claim even if you think the damage is minor.

Donelon says if you filed a claim for Hurricane Ida, your named storm or wind storm deductible will only count once.

"Insurers are only allowed to impose one hurricane or named storm deductible per hurricane season," said Donelon.

Nicholas to spread heavy rain over Texas and Louisiana

He says that's why even if you think you had minimal damage from Ida, you should file a claim, anyway -- because even if the cost of Ida's damage is below your deductible, it will count against your deductible and effectively lower it in the even of another storm this season.

"File your claim, because that eats up some of the deductible in the event of a second storm causing further damage," Donelon explained.

For example, if your insurance company determines that Hurricane Ida caused $2,500 of damage, but your deductible amounts to $5,000, filing a claim for that storm effectively reduces your deductible to $2,500 for any future storms before the end of the season.