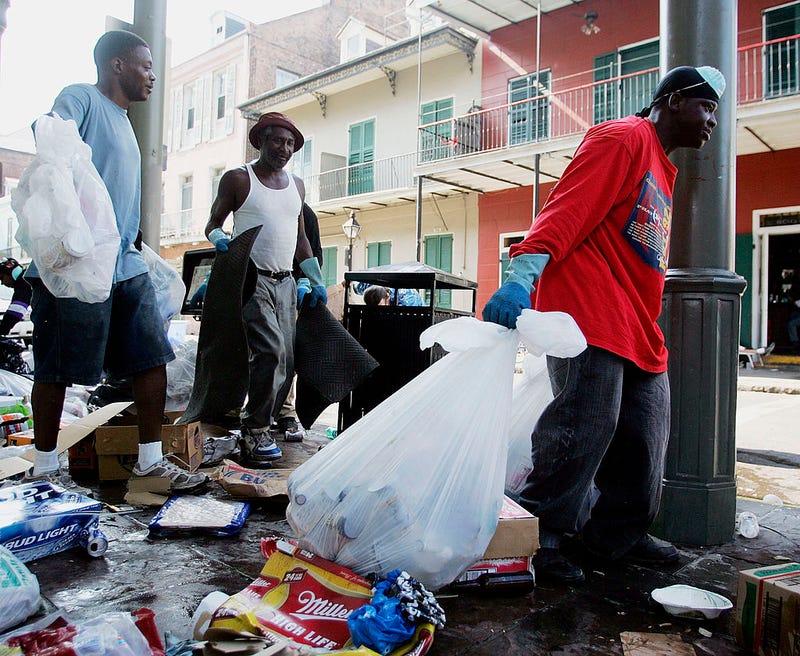 Fed up New Orleans residents are staging a trash parade Saturday to protest the city’s failure to deal with the mountains of festering filth lining the streets. The parade will take off from Elysian Fields and St. Claude on Saturday at 11 a.m. and march right to City Hall.

Over 1,000 people have responded to the Facebook event saying they are interested. Faubourg Marigny resident Aaron Grant spoke with WWL, saying he initially created the event as a joke, but then it took off.

“We are trying to make light of the situation by having a parade, but it’s not a joke it’s very serious,” said Grant. “All I see around me is piles and piles of trash, cans are overflowing, trees chopped up, flies, the entire city is wallowing in festering garbage right now, why?”

According to the Facebook page, a ceremonial bag of garbage will be left at City Hall to send a message, but participants are not being asked to dump their own garbage at 1300 Perdido. Those who march are encouraged to make signs and wear trash-inspired costumes.

“Someone said that they are going as a maggot,” said Grant.

Grant said the Mayor’s offer of dumping your own trash at the Elysian Fields Transfer Station is unacceptable.

“Am I supposed to put my weeks-old garbage in my Accord?” said Grant. “This was a completely avoidable situation. If I were in charge I would think that I would have plans in place to address the sort of crisis that you face in the aftermath (of a hurricane), and that is what we are facing right now, a public health crisis.”

Grant said after creating the page he found out New Orleans sanitation workers went on strike last year over low pay and hazardous pandemic conditions, but the city only awarded them a minor pay raise. He said the inability to hire enough workers is a direct result of that policy and if we want people to do this vital work then they have to be paid a decent wage.

“These guys are doing a very important job, we should be able to pay them so that they can take care of their children and their families,” said Grant.

Thursday Mayor Latoya Cantrell announced the city would begin a “Mardi Gras style” trash collection of excess garbage bags to try and address the situation. Wednesday a contract was signed with an outside collector to augment collection in Algiers, Uptown, and Mid City, but a contractor has yet to be found for other parts of the city.