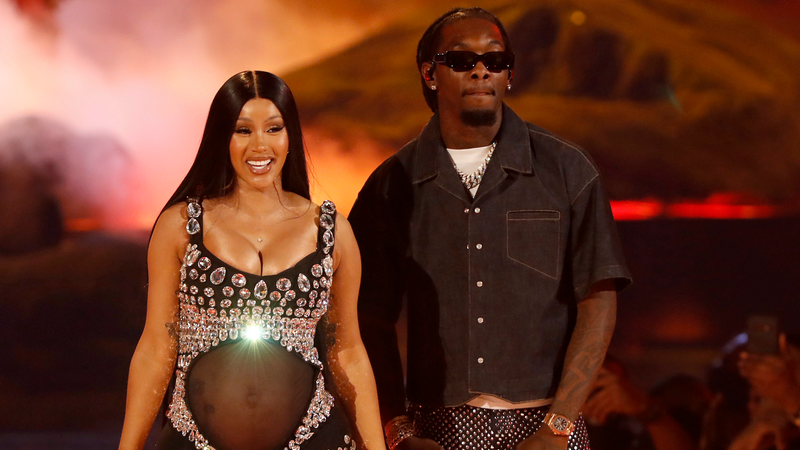 During his visit to Jimmy Kimmel Live, Offset told guest host Anthony Anderson all about his and now wife, Cardi B’s extravagant first date. Since then the grand gift giving has only grown in opulence with the duo exchanging a list of outrageous gifts that Anthony just had to run down.

Starting with Cardi, who’s gifted her hubby presents of a half-million dollars stashed in a refrigerator and a $500,000 golden Lamborghini, as for Offset he’s generously gifted his hunny a Lambo SUV and an over $1 million 20 carat diamond ring modeled off the necklace from Titanic. And that’s just the abridged version of the list.

Seeing a pattern, Anthony had some thoughts, "Your wife seems like she's the type of woman who would expect a push gift after pushing these babies out," the Black-ish star shared. "Do you have a push gift in mind?

So, what does Offset have planned for his darling wife’s push present (for those of you confused, a push present is a gift you give a mother for pushing out a baby). Well, as it seems, Offset has nothing planned as of yet.

At first saying, “I think the beautiful gift is the child,” But then, Offset, probably after thinking of what Cardi might have to say to that, quickly added, “Imma get her a gift though, I got to.”

Anthony has some thoughts about push present going both ways, and just wait to you hear his reasoning, saying, "I like to fight for men getting push gifts, too." Which upon hearing Offset reached out to fist-bump Anthony, who continued, “because we pushed the baby in… that’s all I’m sayin’.” As expected, the audience laughed, and cheered, Offset agreed, and then the conversation moved on to the topic of Offset’s growing brood.

Cardi’s second child with Offset, makes for his fifth child in total. Anthony then tried to be sneaky sneaky and hype up Offset to share the sex and name of the baby, which Offset teased that it's still a "mystery."

Speaking of hype, that’s why the rapper was actually there, to promote his upcoming HBO Max show, The Hype, a streetwear competition series, in which he serves as one of three judges alongside Bephies Beauty Supply founder Beth Birkett and renowned stylist and costume designer Marni Senofonte.

Check out Offset’s entire interview with Anthony above and check out a first look at The Hype below.