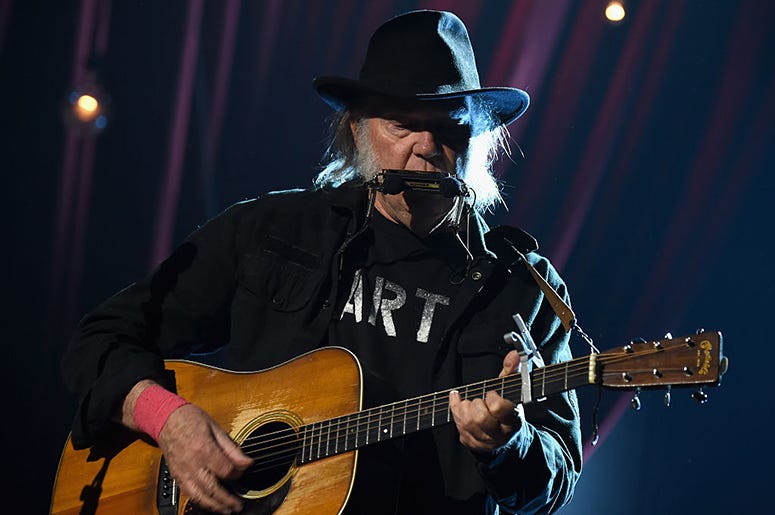 Canadian singer Bob Young, the brother of famed rocker in the free world Neil Young, just released his first single at the age of 78.

The track, “Hey America,” sees the former pro-golfer take on the name Young Bob & the Peterboroughs, which features Bob on vocals and guitar, his brother Neil Young on harmonica, Ryan Weber on bass, Melissa Pyne on fiddle, Mike Belitsky on drums, and Travis Good on the banjo.

The video was directed by Neil, his wife Daryl Hannah, and CK Vollick.

"I didn't set out to become a songwriter and singer at 78 years of age," Bob tells Canada's Exclaim in a statement. "It was and is an organic event. I was watching Donald Trump on TV a couple of years ago and wrote down a few lines. When I got home, I found I could play those lines on guitar. Gradually, it became what it is now. It took a while to be able to play and sing the song from start to finish. When I could finally accomplish that, it was a victory."

Bob continued, "The recording process all happened at once. I had never done that either. It was a band performance that had spontaneity. In another session, some vocal harmony was added, and Neil played harmonica. My perspective is simultaneously that of a participant and spectator. I am watching myself do this. All you aging baby boomers out there, give it a shot. As Yogi Berra put it, 'It ain't over 'til it's over, and even then it ain't over.' I agree. I have more songs, all from the same creative spark."

Neil most recently was a part of the 35th anniversary Live Aid benefit for farmers along with Willie Nelson, Dave Matthews and others which shifted to a virtual setting this year amid COVID-19 safety precautions. He'd also been keeping busy with his online Fireside Sessions from his own farm where he performed for fans, as well as his chickens and alpaca friend, Lazlo.

In June, the now dual American-Canadian singer released the previously unknown album Homegrown, recorded in '74 and early '75, which was originally intended to bridge his classic albums Harvest and Comes A Time.

After The Gold Rush

Pre-order Tomorrow 10/30 at 9 AM PT pic.twitter.com/dsxrfYuTT8

October 30 sees the 50th anniversary reissue of his third album After The Gold Rush, with pre-orders available for CD and as a box set via the Neil Young Archives.