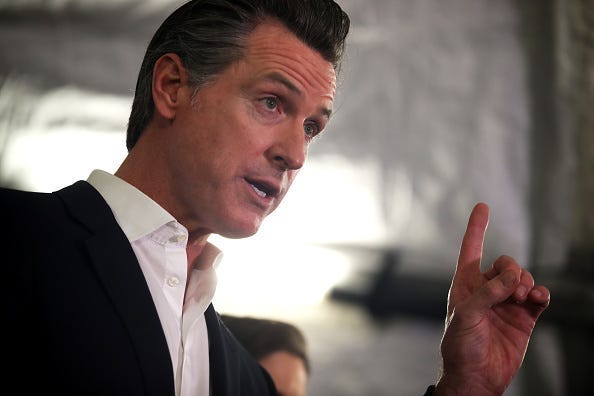 Photo credit Getty Images
By Stan Bunger, KCBS All News 106.9FM and 740AM

As we continue to navigate these unprecedented times, KCBS Radio is getting the answers to your questions about the coronavirus pandemic. Every morning at 9:20 a.m. Monday-Friday we're doing an "Ask An Expert" segment. Each day we'll focus on a different aspect of this situation.

Bunger: We have a number of questions we’d love to get through. My first one is the one that a lot of Californians are asking each other these days: how are you doing?

(laughs) I don’t know that they’re asking that but I appreciate the question. Look, I’m just mesmerized, I’m inspired by 40 million Californians really meeting this moment in a profound way. The reality is we are bending this curve. We are making progress, we are buying time and we are allowing ourselves to really prepare and plan to make sure that if we have a surge, if we exceed capacity within our hospital system, that we can keep people alive and we can take care of people in a way that few states can. So I’ve really been humbled by this and completely overwhelmed by how people have really stepped up to meet this moment.

Sovern: So Governor let’s talk about this surge that you just mentioned. You’ve said that we’re flattening the curve but we’re also stretching it out. People want to know, we’ve been projecting a peak or a surge in April, now are we looking at May? Are we looking at late-May? Might there not actually be a surge? What can you tell people about that?

I think what happens in these environments is that people are watching the national news. There’s an East Coast bias in terms of the focus, which is understandable considering the acuity of the challenge particularly in New York and New Jersey. Their conditions are completely different than the conditions out here on the West Coast, particularly California.

And so we never projected a peak in April, we projected our peak into May. What we have projected based on the new modeling and the stay at home orders and appropriate physical distancing that’s been manifest, is we’re seeing a steady moderate increase. And again that, we project, goes into May before we see that moderate increase begin to decline. But those models, as you suggest, go from bending a curve to then stretching the curve out beyond May: June. So I just want to caution people that just because you bend a curve and you’re no longer at peak doesn’t mean the virus has evaporated and we’re back to some semblance of normalcy.

Bunger: Well Governor that’s exactly what a lot of people are asking though. If that’s the case, does this go on until everyone’s been infected and how long will that be?

Well that’s an open-ended question and anyone who answers it is misleading you. Because the reality is, it depends on two things.

One, our continued vigilance in practicing physical distance. That will be the most determinative thing in terms of how quickly we get back to some semblance of normalcy. And number two, the virus itself. We’ve seen already in parts of the world that they shut things down and they began to open things back up, only now to begin shutting things down again. So that’s a cautionary tale.

And I don’t want to alarm people because they already have cabin fever, people are already feeling overwhelmed and stressed - and by the way that’s today’s announcement on tools to help coping with the family stress and the emotional stress we’re all facing. But the reality is, I think we have to be very honest with folks to socialize that we’re not just a few weeks away and everybody gets to go back and watch the Warriors down at Oracle Arena. The reality is, this is going to take us some time.

Sovern: So one of the questions that we still get a lot from people is that California has still only tested a tiny fraction of its people - and I know the testing is ramping up, but still very few have been tested and there’s a lag in getting results. So how do we really know how many people in California have the virus? There could be tens of thousands, maybe hundreds of thousands who have it but have no symptoms.

And that’s a question that could be asked across this country. I mean, even the most significant tests that have been done are only in the low hundreds of thousands. You’ve got 300-plus million Americans, 40 million that reside in the state of California. We are making progress, we are seeing an increase in our testing capacity including these faster throughput tests and point-of-care tests, which is a fancy way of saying tests that you can get conducted and results in, in five to 15 minutes. These are the Avid laboratory tests of which we’ve gotten 75 sites set up and currently are working within 13 of our healthcare delivery systems. We want to see substantial increase in those tests and quicker results, to your point.

But here’s what I think people should focus on in addition to their anxiety around testing, and that’s what I focus on, and that’s hospitalizations and ICU beds. And that’s where things truly manifest in terms of the acuity, and that acuity is part of our surging planning and part of the announcements we make on a daily basis about finding more alternative sites, ventilators and the like.

Here’s the good news: today I announced that there was a modest 2.1% increase in the number of ICU beds, 1,108, and a 4.1% increase in hospitalizations to 2,611. That contrasts to double digit increases that we were experiencing as early as a week ago. A day is not a trend, a trend is not a headline but I am suggesting that we are seeing some real results in bending the curve because of the physical distancing.

Bunger: But Governor even if those numbers on a percentage basis are smaller, it’s still an increase. Do we have the capacity, including these field hospitals that are still days or weeks away, to handle the numbers based on that curve you’re now seeing?

The answer is yes, and we have to do more. Yes, in this perspective that we have a phase one plan for 50,000 additional beds, 30,000 that would come within the footprint of our existing hospital system, all 416 hospitals would surge their capacity by roughly 40% and they’re confident they can achieve that. They have also slacked their system which means they have significantly reduced the traditional occupancy within their hospital system by eliminating elective surgeries and seeing one of the interesting byproducts of the stay at home order: a reduction in emergency room visits because trauma related to accidents and the like are actually down as a consequence of the stay at home order.

In addition to that we are procuring 20,000 alternative care sites, of which we already have 4,613. I’ve identified an additional 5,005 and are confident that into May-June that we’ll be able to identify the rest.

Sovern: Governor I want to ask you something relatively personal. You’re a father of four  and you’re obviously a very busy man right now, but what’s going on in your own household? How are the kids doing with the homeschool thing? I know you may not be that intimately involved because you have a lot on your plate, but what is day to day life like with the Newsom brood?

It’s not that different than anybody else. We all have fear, we all have anxiety, we all have doubts - we’re all human beings - and those come in many different shapes and forms. You have personal, budgetary stresses, the ability to pay your mortgage and your property tax. You have the deep anxiety of seeing your young children look you in the eye and start to tear up because you tell them ‘you’re not going back to school this school year’ and they’re missing their friends. Others that act out differently, a little more angrily because they can’t have a playdate and they don’t understand why. And they promise that they’ll stay away from their friends and just play soccer and the promise they’ll be six feet apart but you know that’s not realistic. All of that forms, I think, the reality tens of millions of us have and the anxiety that all of us have.

And each of us deal with it differently and that’s why I want to encourage people - I put up a resource site today: covid19.ca.gov.

That lays out detailed guidance to help your teens that are feeling in crisis, to help your children that are emotionally struggling with this moment. To make sure that if you’re aware of elder abuse or child abuse that you can report that information in. Or if you have thoughts - even suicidal thoughts - that we have a hotline, 16 of them that we’ve made available on that site to please check in. Focus not only on your physical health but focus on your brain health, your mental health so that you’re not abusing yourselves and creating secondary health conditions where your diabetes flares up, your asthma flares up or you develop high blood pressure or - god forbid - have a stroke.

Bunger: Governor before we let you go, do you have anything you can give in a way of a concrete sense to parents, teachers, students, millions of Californians who’ve had the school year disrupted - what’s your best guess as to when California may get back to school?

This fall. I’ve been crystal clear about this and I want the districts to be even more crystal clear about this. I mean, the prospect that in mid-May or at the end of May, that we’re going to send 6 million children back into the schools in populations that haven’t mixed for months, to have them mix and then come back home and hug Grandpa or Grandma and caregivers and to potentially see this spread, explode is not one that’s going to happen on my watch.

That said, classes are in. And that’s why its incumbent - we are paying our teachers, we are paying our principals, we are paying our professionals to help educate our children even though the classrooms physically are closed. We’re virtually trying to get that curricula into every household, be it virtually or providing textbooks and support. And it’s really important that every district in the state do its best to meet that and also meet the needs of those that can’t feed themselves and those that need additional supports. And we put out detailed guidelines and we are putting up real money to help support districts in that endeavor.