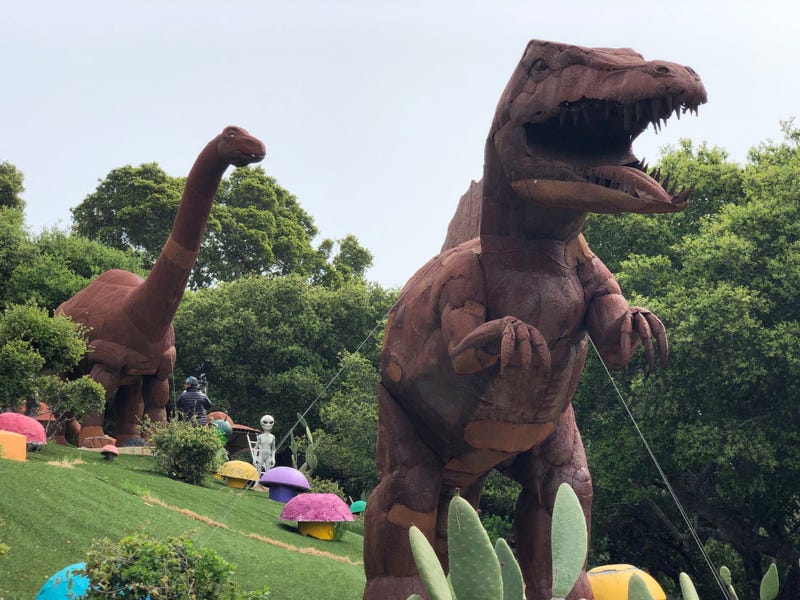 HILLSBOROUGH — An attorney for the owner of the well-known Flintstone house suggested on Thursday that Hillsborough officials are discriminating against her client, because of her race.

Florence Fang, who owns the house, and the town of Hillsborough have been locked in a dispute over her elaborate lawn decorations that include statues of dinosaurs and characters from the cartoon. Hillsborough officials have sued Fang, saying that she installed the eye-catching ornaments without permits.

“The lawsuit accuses me of ignoring the town code and suggests I’m a very bad resident and citizen. That’s not true,” Fang said at a press conference on her colorful property. She said she can't believe that she's been sued.

The town planner told Fang that she could make the renovations without permits, said attorney Angela Alioto.

The owner of the so-called Flintstone House is not backing down against Hillsborough officials who have sued her in an effort to remove the dinosaur decorations and other statues from her yard. The town says that she redesigned her playful property without proper permits. The owner Florence Fang told reporters that she got the green light to make over the grounds. Read more about the ongoing dispute on KCBSRadio.com Photos by @bobbutler7.

Hillsborough Attorney Mark Hudak said that Fang’s ethnicity has nothing to do with her treatment. The town is focused on the supposed permit violation, which could set a bad precedent.

"If somebody can build something like this without permits, well, they can do the Jetsons or Star Wars on some other property and say 'Why should we get permits when Mrs. Fang didn't have to?'"