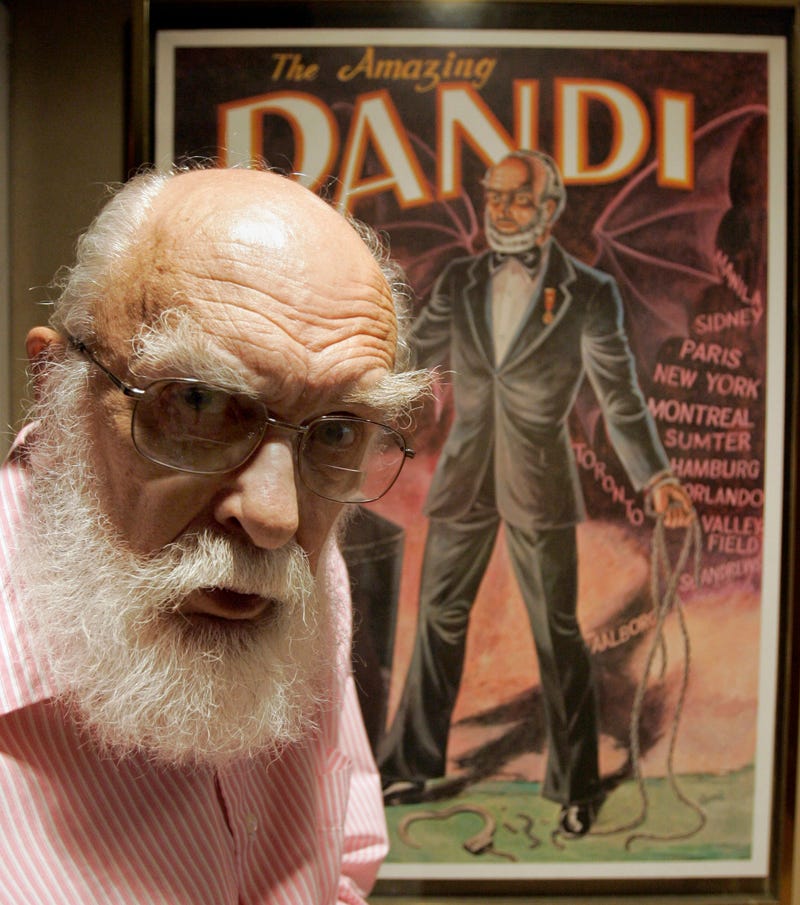 James Randi, a magician who later challenged spoon benders, mind readers and faith healers with such voracity that he became regarded as the country’s foremost skeptic, has died, his foundation announced. He was 92.

The James Randi Educational Foundation confirmed the death, saying simply that its founder succumbed to “age-related causes” on Tuesday.

Entertainer, genius, debunker, atheist ̶ Randi was them all. He began gaining attention not long after dropping out of high school to join the carnival. As the Amazing Randi, he escaped from a locked coffin submerged in water and from a straitjacket as he dangled over Niagara Falls.

Magical as his feats seemed, Randi concluded his shows around the globe with a simple statement, insisting no otherworldly powers were at play.

“Everything you have seen here is tricks,” he would say. “There is nothing supernatural involved.”

The magician’s transparency gave a glimpse of what would become his longest-running act, as the country’s skeptic-in-chief. In that role, his first widely seen exploit was also his most enduring.

On a 1972 episode of “The Tonight Show,” he helped Johnny Carson set up Uri Geller, the Israeli performer who claimed to bend spoons with his mind. Randi ensured the spoons and other props were kept from Geller’s hands until showtime to prevent any tampering.

The result was an agonizing 22 minutes in which Geller was unable to perform any tricks.

Randi had bushy white eyebrows and beard, a bald head, and gold-rimmed glasses, and bounced his 5-foot-6 (1.6 meter) frame energetically, even in his final years. He sought to disprove not just those who read palms and minds, but chiropractors, homeopaths and others he saw as predators seeking innocent people’s money.

Randi targeted those he saw as frauds with a tenacity and dedication he admitted was an obsession. His efforts were reminiscent of those of his great predecessor Harry Houdini, who devoted large portions of his time to debunking spiritualists and their seances.

“I see people being swindled every day by medical quackery, frauds of every sort, psychics and their hot lines, people who claim to be able to find lost children or to help them invest their money,” Randi told The Associated Press in 1998. “I know they are being swindled because I know the methods being used.”

Once, awaiting the chance to sift through the trash of a faith healer, Randi spent days in his car, eating Twinkies and drinking Pepsi.

“I suffer from this obsession that I have something important to do,” he explained in a 2007 interview with The AP.

There were other coups for Randi: He once showed the messages television faith healer Peter Popoff claimed to be getting from God about his audience were actually coming from his wife through an earpiece. But the vast majority of those he aimed to show were frauds were lesser known, lured to prove their abilities by the James Randi Educational Foundation.

Through that organization, Randi was guardian of a $1 million prize he promised to give anyone who could prove either their own supernatural powers or the presence of a supernatural being.

His loudest detractors said they didn’t believe the money even existed, but Randi had the bank documentation. No one ever came close to collecting.

Randi gave up the day-to-day operation of his foundation in 2009 and retired in 2015.

Born Randall James Hamilton Zwinge in Toronto on Aug. 7, 1928, Randi ̶ known by everyone simply by that surname ̶ had a nagging desire to question from a young age. Academically, he said he was bored in school and teachers acknowledged he was prodigy far ahead of his peers. He never earned a high school diploma or went to college but in 1986 was awarded a prestigious MacArthur fellowship, often known simply as a “genius grant.”

He spoke with certainty. While he said he never really questioned his beliefs, he acknowledged there was always a chance he was wrong.

For all the analysis Randi put into seemingly everything, he still found delight in observing magic he knew was a stunt or watching a film that was just fantasy. He talked about the crushing feelings of watching a friend die and spoke of the magic of love. In 2010, he announced he was gay. In 2013, he married his longtime partner, Deyvi Pena, at a ceremony in Washington, D.C. He was the subject of a 2014 documentary, “An Honest Liar.”

Penn Jillette, a magician in the mold of Randi, mourned his friend on Twitter on Wednesday night, writing: “We will never forget that without Randi, there would not be Penn & Teller. It’s really that simple.”

Randi said he couldn’t help feeling angry that his targets always seemed to perform escape acts of their own, continuing to win new followers and earn checks he said were cashed at reality’s expense. He wanted to see frauds punished, but he recognized most people wanted to believe.

“The true believers,” he said, “will not pay any attention to evidence that does not show that they believe to be untrue.”

It was frustrating to Randi and fueled an underlying anger toward those he labeled frauds. When he let his displeasure slip out, though, it often was mixed with wit, as when asked about his final wishes and how he’d like his ashes disposed.

“My best friend is instructed to throw them in Uri Geller’s eyes,” he said. “I’d like him to get an eyeful of my ashes. I think that would be appropriate.”

The day of death has been corrected to Tuesday, not Monday.