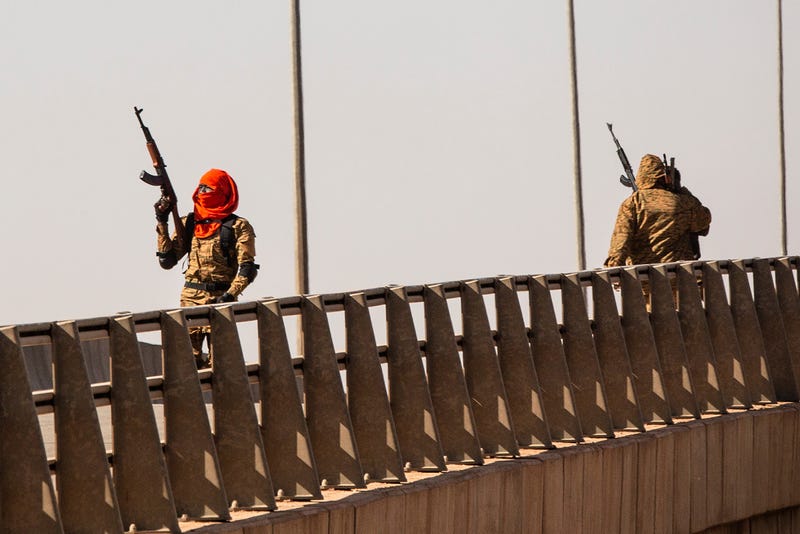 OUAGADOUGOU, Burkina Faso (AP) — Gunfire rang out late Sunday near the home of Burkina Faso's embattled President Roch Marc Christian Kabore, raising the specter that a military coup might still be under way after mutinous soldiers seized a military base earlier in the day.

Government officials had sought to reassure people that the situation was under control even as shots rang out for hours at the army base. But by day’s end anti-government protesters supporting the mutineers also had set fire to a building belonging to Kabore’s party.

It was not immediately known whether Kabore was at home but several people in the area told The Associated Press that in addition to gunfire they could hear helicopters hovering overhead.

A mutinous soldier also told AP by phone that heavy fighting was under way near the presidential palace, a claim that could not immediately be independently corroborated.

Sunday's mutiny came one day after the latest public demonstration calling for Kabore's resignation as anger has mounted over the government's handling of the Islamic insurgency. Anti-government protesters lent public support to the mutinous soldiers, prompting security forces to use tear gas to disperse crowds in the capital.

The West African regional bloc known as ECOWAS, which already has suspended Mali and Guinea in the past 18 months over military coups, issued a statement of support for Burkina Faso's embattled president and urged dialogue with the mutineers.

Defense Minister Aime Barthelemy Simpore told state broadcaster RTB that a few barracks had been affected by unrest not only in the capital of Ouagadougou but in other cities, too. He denied, however, that the president had been detained by the mutineers, even though Kabore's whereabouts remained unknown.

“Well, it’s a few barracks. There are not too many,” Simpore said. “In some of these barracks, the calm has already returned. So that’s it for the moment. As I said, we are monitoring the situation.”

A news headline on the state broadcaster described the gunfire as “acts of discontent by soldiers."

“Contrary to some information, no institution of the republic has been targeted," the headline continued.

At the Lamizana Sangoule military barracks in the capital, however, angry soldiers shot into the air Sunday, directing their anger over army casualties at the president. About 100 motorcycles later left the base, chanting in support of the mutineers, but were stopped when security forces deployed tear gas.

The soldiers put a man on the phone with The Associated Press who said that they were seeking better working conditions for Burkina Faso's military amid the escalating fight against Islamic militants. Among their demands are increased manpower in the battle against extremists and better care for those wounded and the families of the dead. The mutinous soldiers also want the military and intelligence hierarchy replaced, he said.

There were signs Sunday that their demands were supported by many in Burkina Faso who are increasingly distressed by the attacks blamed on al-Qaida and Islamic State-linked groups. Thousands have died in recent years from those attacks and around 1.5 million people have been displaced.

“We want the military to take power,” said Salif Sawadogo as he tried to avoid tear gas on the streets of Ouagadougou. “Our democracy is not stable.”

Kabore first took office in 2015, winning the election held after longtime President Blaise Compaore was ousted in a popular uprising.

Still, Kabore has faced growing opposition since his reelection in November 2020 as the country's Islamic extremism crisis has deepened. Last month he fired his prime minister and replaced most of the Cabinet, but critics have continued calling for his resignation.

On Sunday, protesters who supported the army mutiny said they had had enough of Kabore even though the next presidential election isn't until 2025. Demonstrator Aime Birba said the violence under Kabore has been unlike anything Burkina Faso experienced during the nearly three decades Compaore was in power.

“We are currently under another form of dictatorship,” he said. “ A president who is not able to take security measures to secure his own people is not a president worthy of the name.”

Earlier this month, authorities had arrested a group of soldiers accused of participating in a foiled coup plot. It was not immediately known whether there was any connection between those soldiers and the ones who led a mutiny Sunday. Military prosecutors said nine soldiers and two civilians were being held in connection with the plot.

West Africa has seen a spate of military coups in West Africa over the past 18 months, causing the regional bloc known as ECOWAS to suspend two member states simultaneously for the first time since 2012.

In August 2020, a mutiny at a Malian military barracks led to the democratically elected president being detained. He later announced his resignation on national television, and the junta leader there doesn't want new elections for four more years.

In September 2021, Guinea's president also was overthrown by a military junta that remains in power to this day.

Burkina Faso, too has seen its share of coup attempts and military takeovers. In 1987, Compaore came to power by force. And in 2015, soldiers loyal to him attempted to overthrow the transitional government put into place after his ouster. The army was ultimately able to put the transitional authorities back in power, who led again until Kabore won an election and took office