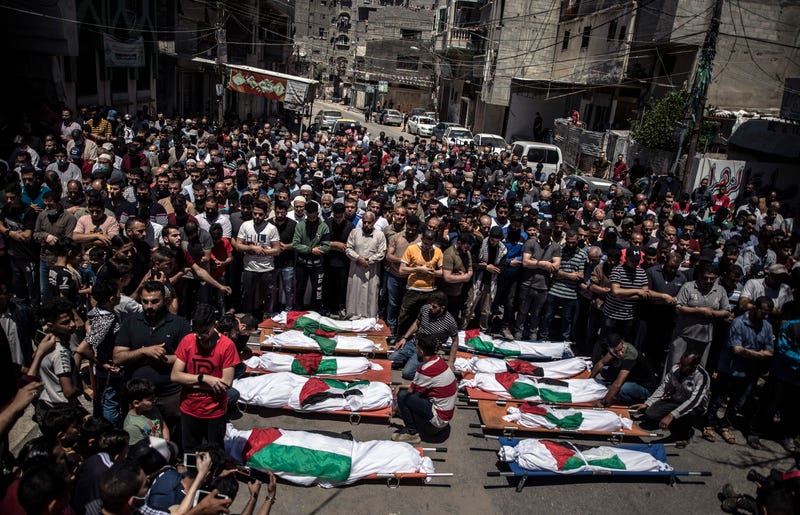 GAZA CITY, Gaza Strip (AP) — Israel slammed the Gaza Strip with airstrikes, in a dramatic escalation that included bombing the home of a senior Hamas leader, killing a family of 10 in a refugee camp — most of them children — and pulverizing a high-rise that housed The Associated Press and other media.

The Hamas militant group continued a stream of rocket volleys into Israel, including a late-night barrage on Tel Aviv. One man was killed Saturday when a rocket hit his home in a suburb of the seaside metropolis.

With a U.S. envoy on the ground, calls increased for a cease-fire after five days of mayhem that have left at least 145 Palestinians dead in Gaza — including 41 children and 23 women — and eight dead on the Israeli side, all but one of them civilians, including a 5-year-old. President Joe Biden, who has called for a de-escalation but has backed Israel’s campaign, spoke separately by phone with Israeli Prime Minister Benjamin Netanyahu and Palestinian President Mahmoud Abbas.

Still, Israel stepped up its assault, vowing to shatter the capabilities of Gaza’s Hamas rulers. The week of deadly violence, set off by a Hamas rocket Monday, came after weeks of mounting tensions and heavy-handed Israeli measures in contested Jerusalem.

Early Sunday, Israeli warplanes struck several buildings and roads in a vital part of Gaza City. Photos circulated by residents and journalists showed the airstrikes created a crater that blocked one of the main roads leading to Shifa, the largest hospital in the strip.

The Health Ministry said the latest airstrikes left at least two dead and 25 wounded, including children and women. There has been no immediate comment from the Israeli military.