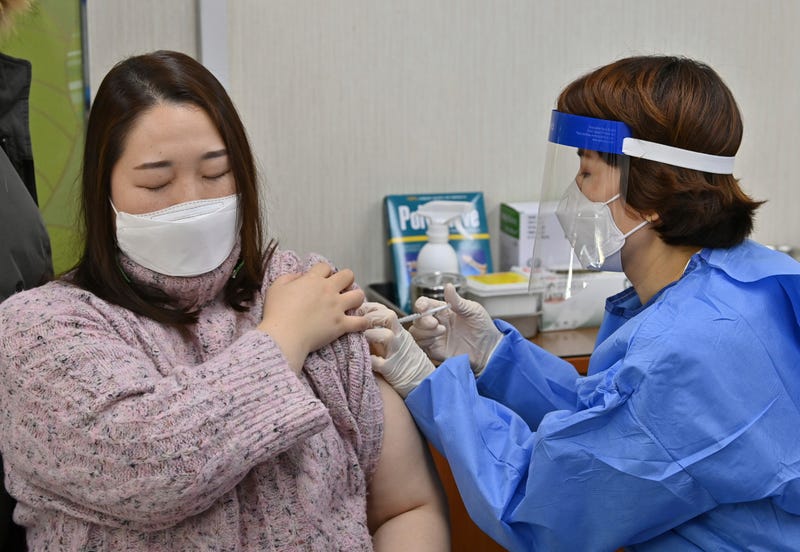 SEOUL, South Korea (AP) — South Korea administered its first coronavirus vaccines Friday to people at long-term care facilities, launching a mass immunization campaign that authorities hope will restore some level of normalcy by the end of the year.

The rollout comes at a critical time for the country, which has seen its hard-won gains against the virus get wiped out by a winter surge and is struggling to mitigate the pandemic’s economic impact. Yet it also comes with controversy over the government's decision to delay inoculating people older than 65.

“I felt very anxious over the past year, but I feel more secure now after receiving the vaccine,” said Lee Gyeong-soon, a nursing home worker, who got her shot at a public health center in northern Seoul.

More than 5,260 residents and workers at 213 nursing homes, mental health facilities and rehab centers who are younger than 65 were to receive their first shots of the two-dose vaccine developed by AstraZeneca and Oxford University on Friday.

An unspecified number of patients and workers at 292 long-term care hospitals and in the same age group will also get the vaccine, according to officials at the Korea Disease Control and Prevention Agency.

By the end of March, authorities plan to complete injecting the first doses to some 344,000 residents and workers at long-term care settings, who will receive the Oxford-AstraZeneca vaccines, and 55,000 frontline medical workers, who will receive shots developed by Pfizer and BioNTech.

Long-term care facilities, where elders or people with serious health problems often live in crowded settings, have endured the worst of South Korea’s outbreak. About 35% of the country’s COVID-19 deaths by the end of 2020 were linked to these facilities, said Jaehun Jung, a professor of preventive medicine at the Gachon University College of Medicine in Incheon.

But there’s criticism over the government’s decision to delay the approval of the Oxford-AstraZeneca vaccines for people over 65 until the developers provide more data on effectiveness for that age group. The government has yet to approve any vaccine for people older than 65, but officials have indicated the Pfizer shot could get approved first.

Jung says the decision risks the safety of people who are most vulnerable to COVID-19 when the country will be chiefly dependent on locally produced Oxford-AstraZeneca vaccines during the early part of its vaccination campaign.

Despite what the government sees as a lack of laboratory data on its efficacy in older adults, the Oxford-AstraZeneca vaccine is still showing real-world effectiveness in preventing serious illnesses and lowering death rates in the countries where it was used, experts say. People over 80 account for just 5% of the country’s coronavirus cases, but 56% of its virus-related deaths, Jung said.

The vaccinations began as South Korea reported another 406 new infections Friday, brining its total for the pandemic to 88,922, including 1,585 deaths.

Health Ministry official Son Young-rae said the start of the campaign was “the historic first step toward restoring normalcy.”

Son said to help create a safe environment for vaccinations the government is extending current measures on social distancing for at least another two weeks.

Using refrigerated trucks escorted by police and military vehicles, South Korea transported 1.57 million doses of Oxford-AstraZeneca vaccines across the country from Wednesday to Thursday. These shots were produced in the southern city of Andong, where local pharmaceutical company SK Bioscience manufactures the vaccines under a contract with AstraZeneca.

Separately, doctors, nurses and other health professionals treating COVID-19 patients will begin receiving Pfizer shots from Saturday. On Friday, 117,000 doses of that vaccine, which South Korea obtained through the WHO-backed COVAX program, arrived in the country.

South Korea plans to secure enough doses to vaccinate 79 million people this year, well over its population of 51 million, through bilateral negotiations with pharmaceutical companies and COVAX, which was established to promote global access to vaccines.

While there has been disappointment the shots haven’t come sooner, officials have insisted South Korea could afford a wait-and-see approach as its outbreak isn’t as dire as in the United States or Europe.

Officials aim to vaccinate more than 70% of the population by November, which they hope would meaningfully slow the virus and reduce risks of economic and social activity.

However, experts say a safe return to life without masks would be highly unlikely this year, considering the need to monitor the vaccines’ real-world effectiveness and the growing spread of virus variants that are feared to be more contagious.

“Even if we achieve the government target by November, we probably won’t be able to (immediately) go back to the pre-COVID-19 days,” said Choi Won Suk, an infectious disease professor at the Korea University Ansan Hospital, west of Seoul.