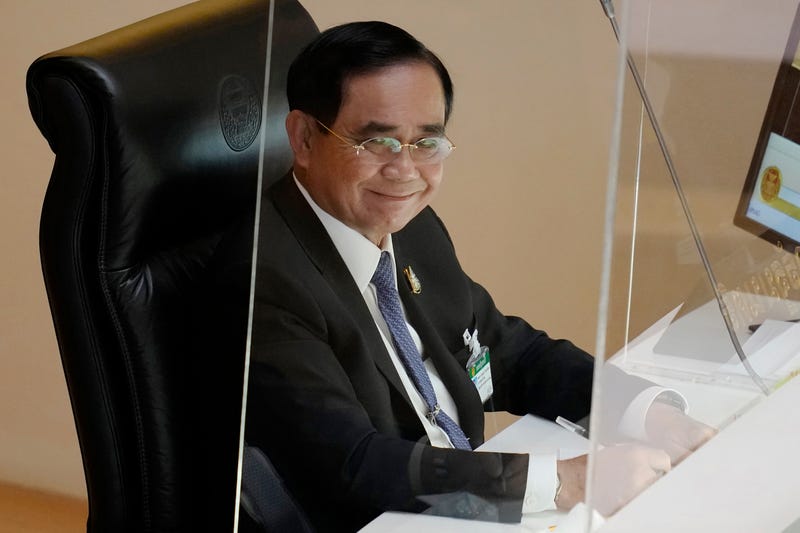 BANGKOK (AP) — Thailand’s Constitutional Court ruled Friday that Prime Minister Prayuth Chan-ocha can remain in his job and did not violate a constitutional provision limiting him to eight years in office.

Opposition lawmakers had petitioned the court to decide on their contention that Prayuth, who took power as army commander in a 2014 coup, had violated the eight-year limit for prime ministers that was included for the first time in Thailand’s 2017 Constitution.

Prayuth officially became prime minister in a military government in August 2014, and was named prime minister again after a 2019 election. Using 2014 as a starting date, he would have reached his legal limit last month.

He and his supporters argued that the countdown for the term limit should begin when the current constitution came into effect in April 2017, which would allow him to serve until 2025 if he is returned to office after the next general election.

The nine-member court ruled in a 6-3 vote that because the constitution came into effect after Prayuth had already taken power, the term limit did not apply to the time he had previously served, since the constitution did not specify it could be applied retroactively.

The court's decision had been widely expected, since it has generally ruled in the government's favor in a series of political cases. The judiciary, especially the Constitutional Court, and the military are strong defenders of the country's conservative establishment, whose most important pillar they consider to be the monarchy,

Prayuth will still face a political reckoning early next year when Parliament’s four-year term expires and a new election must be called. His popularity ratings are low, with critics saying he has mishandled the economy and botched Thailand’s initial response to the COVID-19 pandemic.

In 2020, tens of thousands of people took to the streets to demand that Prayuth and his Cabinet resign, while also calling for the constitution to be amended and the monarchy to be reformed. Several confrontations between the student-driven protest movement and authorities turned violent. Activists threatened new protests if the court favored Prayuth, raising fears of more unrest.

The protest movement was weakened by COVID-19 restrictions and repression from the government, and only about 30 people answered a call to demonstrate Friday in central Bangkok, shouting insults as they listed to the court's verdict over a loudspeaker.

Chai-amorn Kaewwiboonpan, a musician and veteran activist also known as Ammy, said the ruling was no surprise.

“I think tomorrow the people will come out on the streets, and hopefully we will have a lot of people,” he said.

A leading anti-government protest group, Ratsadon, called Prayuth an “illicit prime minister” and asked people to dress in black from Oct. 1 to Oct. 7 to express mourning for Thailand's political future.

Prayuth paid his respects to the court on his Facebook page and thanked those Thais who he said had given him good wishes and encouragement since the court took up the case.

“It was the opportunity for me to realize that I must spend the government’s limited remaining time to follow up and push several important projects that I have initiated, and complete them for the country’s progress and our children’s future,” he said, highlighting infrastructure development.

Had Prayuth been forced out Friday, power would have been ceded to a caretaker government with limited executive powers, assembled from the current Cabinet, that would have sat until Parliament elected a new prime minister.

The eight-year term limit was meant to target former Prime Minister Thaksin Shinawatra, a populist billionaire who was ousted by a 2006 military coup but whose political machine remains powerful. The army in 2014 also ousted the government of Thaksin’s sister, Yingluck Shinawatra, who was forced from office shortly before the takeover by a controversial court decision.

Thailand’s traditional conservative ruling class, including the military, felt that Thaksin’s popularity posed a threat to the country’s monarchy as well as their own influence. The courts have been stalwart defenders of the established order and ruled consistently against Thaksin and other challengers.