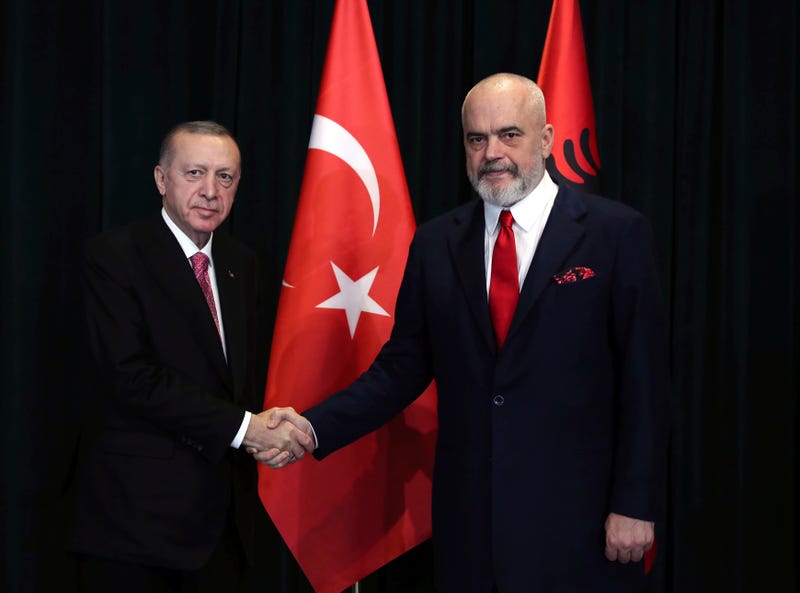 TIRANA, Albania (AP) — Albania and Turkey on Monday pledged to further boost their ties and increase their economic and cultural relations.

Upon landing Erdogan immediately headed to the northwestern town of Lac, 50 kilometers (30 miles) northwest of the capital Tirana, where Turkey has funded the building of a complex with 522 apartments at a cost of 42 million euros ($48 million).

An international conference less than two months after the Nov. 26, 2019, earthquake which killed 51 people and left 17,000 homeless, committed more than a billion euros to rebuild homes, businesses and public buildings destroyed in the quake. Turkey was a major donor.

Turkey is one of Albania’s largest investors and trading partners, contributing to infrastructure investment and development.

Erdogan said ties with Albania were "at the level of strategic partnership,” adding both countries aim to reach a $1 billion annual exchange from $853 million (747 million euros) a year ago.

Erdogan also repeated his request to Albania to take “concrete, decisive steps” toward removing the presence of the Fetullah Terrorist Organization, or FETO, which he called a terrorist organization.

Turkey says that FETO and its U.S.-based leader Fetullah Gulen orchestrated the failed coup of July 15, 2016, in Turkey, which left 251 people dead and nearly 2,200 wounded. Gulen has denied any involvement.

Ankara also accuses FETO of being behind a long-running campaign to overthrow the state through the infiltration of Turkish institutions, particularly the military, police and judiciary.

A system of schools in Albania, from pre-school up to university level, was run by Gulen before ownership was passed to other people.

“It wounds our nation that had its children martyred that FETO can still find areas of activity in friend and sibling Albania,” Erdogan said.

The Albanian prime minister considered Turkey’s role in the Western Balkan region as “indispensable, inalienable and no doubt a constructive role for peace.”

Both Albania and Turkey have applied for membership in the European Union but that seems far away.

“Without Turkey the EU would not be in the situation it is now, but worse,” Rama said. “Turkey is an inevitable valve for EU’s security,” said Rama.

Zeynep Bilginsoy contributed to this report from Istanbul.