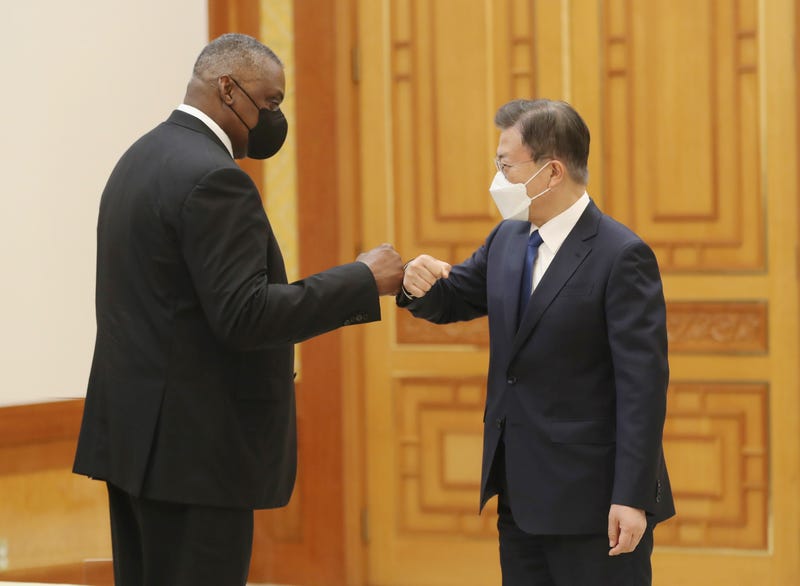 U.S. Defense Secretary Lloyd Austin's stern comments after annual security talks with South Korea, a top U.S. ally, are a window into one of the Biden administration's top foreign policy worries: How should Washington and its partners contain a Chinese military that is strengthening — both in sheer firepower and in confidence — as it pursues an end of American dominance in Asia?

China sees much of Asia as its natural sphere of influence. But many in the region warn of a pattern of Chinese interference, accompanied by moves to acquire the weapons needed to dominate its rivals. Austin's comments were directed at China's July test of a hypersonic weapon capable of partially orbiting Earth before reentering the atmosphere and gliding on a maneuverable path to its target.

Experts say the weapons system is clearly designed to evade U.S. missile defenses, although China insisted it was testing a reusable space vehicle, not a missile.

“We have concerns about the military capabilities that the PRC continues to pursue, and the pursuit of those capabilities increases tensions in the region,” Austin said about the hypersonic weapons test, using the abbreviation for the People’s Republic of China, the country’s official name.

“We’ll continue to maintain the capabilities to defend and deter against a range of potential threats from the PRC to ourselves and to our allies,” he said.

The Pentagon released on Monday the results of a global posture review that calls for additional cooperation with allies to deter “potential Chinese military aggression and threats from North Korea.”

Last month, Gen. Mark Milley, chairman of the Joint Chiefs of Staff, said the United States is also working on hypersonic weapons. But there is worry in Washington that it is lagging behind China and Russia in pursuing these types of weapons. Russia said Monday its navy successfully tested a prospective hypersonic cruise missile.

Hypersonic weapons, which fly at speeds in excess of Mach 5, or five times the speed of sound, could pose crucial challenges to missile defense systems because of their speed and maneuverability. But some experts argue that hypersonic weapons would add little to America’s ability to deter war and worry that they could trigger a new, destabilizing arms race.

He said that he agreed with South Korean Defense Minister Suh Wook that the North's growing weapons program “is increasingly destabilizing for regional security." Austin said the allies remain committed to a diplomatic approach to North Korea.

Suh said the two agreed on a document updating joint contingency plans in the event of a war on the peninsula to reflect changes in North Korean threats and other conditions, but didn’t elaborate on the document's details.

North Korea’s nuclear arsenal is believed to have grown significantly in recent years.

After a series of high-profile missile and nuclear tests in 2016-17, North Korea claimed to have the ability to launch nuclear strikes on the American homeland. According to a 2018 South Korean estimate, North Korea has built up to 60 nuclear weapons.

Despite severe economic hardships related to the pandemic, North Korea has continuously rebuffed U.S. offers to resume disarmament talks, saying Washington must first abandon its hostility. The Biden administration maintains that international sanctions on North Korea will stay in place until the country takes concrete steps toward denuclearization.

The United States stations about 28,500 soldiers in South Korea to deter potential aggression from North Korea. During Thursday’s meeting, Austin highlighted a U.S. commitment to maintain the current level of U.S. forces, according to a joint statement.

The alliance, forged during the 1950-53 Korean War, was tested in recent years as then-President Donald Trump threatened to pull U.S. troops out of South Korea if Seoul did not drastically increase its financial support for them. Trump also repeatedly complained of the cost of regular military drills between Washington and Seoul.

Such concerns have eased since President Joe Biden took office in January. But the alliance still faces challenges such as Seoul’s historical disputes with Japan, another key U.S. regional ally, and its hesitation to join U.S.-led initiatives targeting China, its biggest trading partner.

Austin and Suh pledged to continue trilateral cooperation involving Japan. But they didn’t elaborate on how South Korea and Japan could overcome tensions stemming largely from Tokyo’s 1910-45 colonization of the Korean Peninsula.