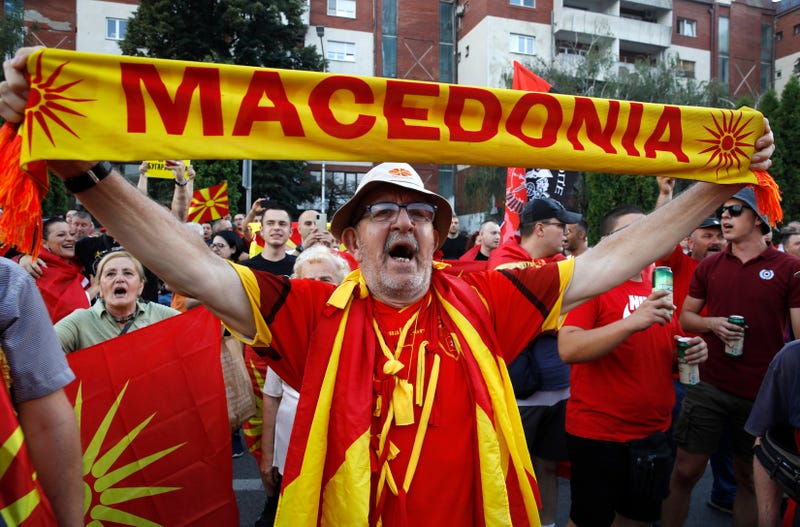 Violent protests erupted in North Macedonia's capital, Skopje, where demonstrators tried to storm government buildings, after French President Emmanuel Macron announced the proposal — which many in the small Balkan country find controversial — last week. Macron said at a NATO summit in Madrid that “a compromise solution” to lift Bulgaria's opposition to its neighbor's EU aspirations had been achieved, without giving details.

A few hundred people took part in a new protest late Tuesday in Skopje against the French proposal. Held during a rainstorm, it ended peacefully, but afterwards a small number of protesters threw stones at police outside parliament before being dispersed.

North Macedonia’s president, Stevo Pendarovski, and the government have backed the proposed deal, which calls for the country to acknowledge in its constitution the existence of an ethnic Bulgarian minority. It would also provide for regular reviews on how the bilateral dispute is being addressed, which could potentially hamper North Macedonia's future accession course.

But the center-right main opposition VMRO-DPMNE party, many international law experts and civic organizations say the proposal favors Bulgarian demands which dispute their own country's views of regional history, language, identity and heritage.

As an EU member, Bulgaria has the power to block its neighbor's accession bid.

At a joint news conference Tuesday with North Macedonia’s prime minister, Dimitar Kovachevski, Michel stressed that the French proposal is too “important an opportunity to be missed.”

Michel said that if North Macedonia accepts the proposal, then the path for the country to start EU accession talks could open within days.

Kovachevski reiterated his support for the “balanced proposal," adding that "our aim is to start membership talks.”

On a third day of mass protests late Monday in Skopje, protesters threw stones, eggs and bottles at the government offices and parliament building in downtown Skopje. Police prevented the crowd of several thousand people from forcing their way into government offices. Four police were injured in front of parliament.

Bulgaria insists that North Macedonia formally recognizes that its language has Bulgarian roots, acknowledges a Bulgarian minority and quashes “hate speech” against Bulgaria.

North Macedonia has been a candidate for EU membership for 17 years. The country received a green light in 2020 to begin accession talks, but no date for the start of the negotiations has been set.

Before Bulgaria raised its objections, North Macedonia settled a decades-old dispute with another neighbor and EU member, Greece, to forward its aim of joining the 27-nation bloc. As a result it added the word North to its previous name, Macedonia, which Greece had complained implied claims on its own territory, history and cultural heritage.

The dispute with Bulgaria has also stalled the progress of another Balkan country, Albania, toward EU membership because the bloc is treating the pair as a political package. North Macedonia, Bulgaria and Albania are all NATO members.