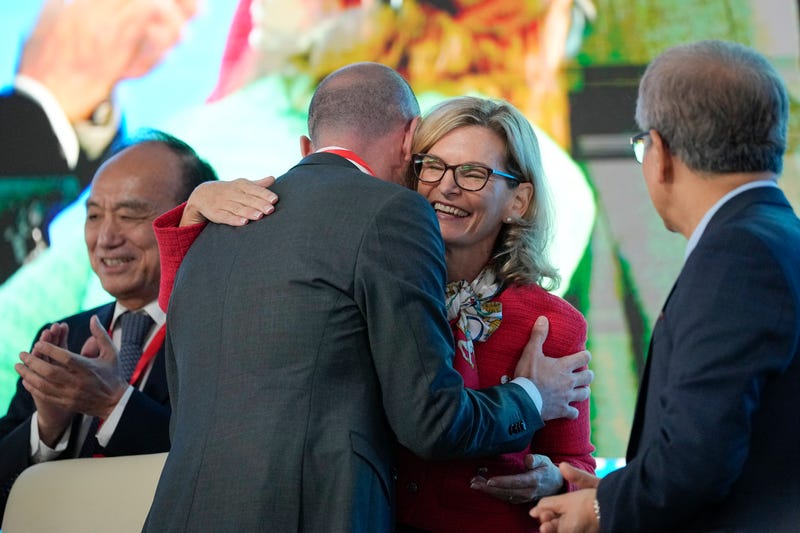 BUCHAREST, Romania (AP) — Doreen Bogdan-Martin of the United States was elected Thursday to head the U.N.’s telecommunications agency, winning a U.S.-Russia face-off for the leadership of a global agency that sets guideposts for radio, internet, satellite and television communications.

Envoys from the 193 member states of the Geneva-based International Telecommunications Union selected Bogdan-Martin over lone rival Rashid Ismailov of Russia, ending a contest that was largely overshadowed by geopolitics in the wake of Russia’s war in Ukraine.

Members of the agency's policy-making body meeting in Romania's capital voted 139-25 with a number of abstentions in favor of naming the first woman as ITU secretary-general and the first American to hold the post since the 1960s.

Bogdan-Martin, who will begin her four-year term as ITU secretary-general on Jan. 1, is a 29-year ITU veteran and the current director of its telecommunication development bureau. Her career began in the U.S. Commerce Department.

Speaking in the plenary hall in Bucharest after her election, Bogdan-Martin described the leadership position as “an immensely important position” and said it will be an “honor for me and my country” to lead the organization.

“I hope this day will be an inspiration for other women to follow,” she said. “We need to deliver affordable, trusted, and meaningful connectivity to all. Universal connectivity has been a dream for far too many years — let’s unite and make it real.”

Ismailov, 57, is a former deputy telecommunications minister in Russia and a former executive in telecom companies such as Eriksson, Nokia and Huawei. Before Thursday's vote, both candidates touted expanding connectivity to the internet and the benefits of information and communication technology, or ICT, to roughly half the world that still has no access.

U.S. Secretary of State Antony Blinken, alluding to the Biden administration's support for Bodgan-Martin, hailed a broad international endorsement of her vision for “universal connectivity, digital empowerment, and leadership at the ITU that is innovative, collaborative, and inclusive.”

“We have made clear since the earliest days of the administration that American leadership in multilateral venues, including the United Nations, is crucial to ensuring the international community is best positioned to address our shared challenges,” Blinken said.

David Gross, a former State Department official now with the Wiley law firm in Washington, said Bodgan-Martin's margin of victory showed much of the world rejects “the Russian approach regarding government ‘top-down’ control of technology" and said her challenges would now include finding “common ground among competing approaches” and “creative ways to connect the unconnected.”

The ITU, whose history dates to 1865, is among the oldest U.N. specialized agencies and predates the United Nations itself by 80 years. The agency has its roots among countries that coordinated over the development of the telegraph, a forebear of the high-tech telecommunications of today.

The agency's main tasks now are setting out a “digital transformation” for the 21st century — as outgoing Secretary-General Houlin Zhao put it — and setting out standards for telecommunications and regulating the development of technologies like 5G networks.

U.S. officials were eager to recapture the post amid news reports and allegations from experts suggesting that Zhao, a former government official in China, was too cozy with Beijing and promotional of Chinese interests and technology standards during his two terms as ITU chief.

Russian President Vladimir Putin’s war in Ukraine, which has put Moscow on the diplomatic defensive, led some countries to think twice about handing a top U.N. post to a former member of Russian government. Ismailov has alluded to the pressure Russia has faced — including in Geneva diplomatic circles that are home to many U.N. institutions like the ITU.

Also weighing over Ismailov’s bid were concerns that Russia’s government has encouraged at worst -- or turned a blind eye to, at best - the use of the Internet and other telecommunications networks to disrupt activities of foreign companies, governments and civilians, if not spy on or monitor people at home.

The United States also has come in for sharp criticism – notably from former National Security Agency contractor Edward Snowden, who fled to Russia to escape U.S. justice – over its own surveillance and spying on civilians and government officials.