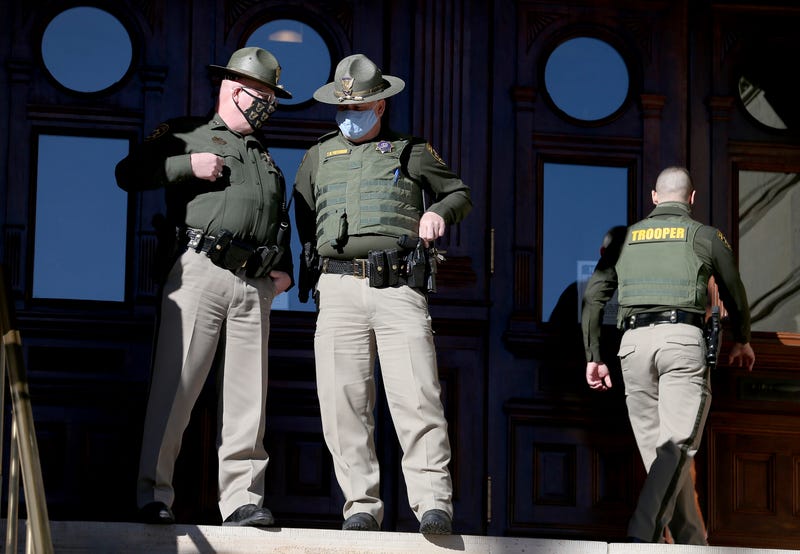 CHEYENNE, Wyo. (AP) — While the Wyoming National Guard was sending more than 100 troops to Washington, D.C., to help with security around President Joe Biden's inauguration in January, Gov. Mark Gordon quietly mobilized dozens of Guard troops and others in case of violence at the state Capitol in Cheyenne.

The all-but-undisclosed local deployment Jan. 15-21, specifics of which came to light Friday after an inquiry by The Associated Press, stood in stark contrast with the state's contribution to U.S. Capitol security praised by Gordon and other top Wyoming officials.

“Thank you to the @wyoguard members who are serving our country by providing support at today’s Presidential inauguration. Wyomingites are grateful for your service,” Gordon, a Republican, tweeted on Inauguration Day, Jan. 20.

Wyoming's congressional delegation — Sens. John Barrasso and Cynthia Lummis and Rep. Liz Cheney, all Republicans — likewise have posed in photos with and lauded the Wyoming troops at the U.S. Capitol but not those working similar duty back home.

The governor didn't previously disclose details of the deployment of 60 Army National Guard and 13 Air National Guard members in the Cheyenne area because it was a “security operation,” Gordon spokesman Michael Pearlman said Friday.

“They basically were prepared to do backup in case there was some sort of violent action at the Capitol,” Pearlman said. “They can’t perform law enforcement duties, so they were purely as support.”

While other states such as Utah made high-profile increases to security after an FBI warning of “armed protests” in all 50 states that week, security in Cheyenne appeared light. In fact, the Guard troops weren't far away at an “undisclosed location," Pearlman said.

The Cheyenne deployment was announced in the vaguely worded last line of a Wyoming National Guard news release Jan. 14 that announced the troops headed to Washington, D.C., Pearlman added.

“Additional National Guard Soldiers and Airmen will be made available to provide support to Wyoming authorities, should the need arise,” the release said without elaboration.

The added security proved unnecessary. Hundreds of protesters prompted a lockdown of the Wyoming Capitol on Jan. 6, the same day a mob of President Donald Trump's supporters stormed the U.S. Capitol, resulting in five deaths.

Hundreds turned out again Jan. 28 to hear Florida Republican Rep. Matt Gaetz rail from the Capitol steps against Cheney for voting to impeach Trump for the riot. Both gatherings were peaceful and no protests of note happened in Cheyenne between those dates.

The extra use of Guard troops, Wyoming Highway Patrol troopers, local police and sheriff’s officers and state park personnel in Cheyenne came to light with an Associated Press request for costs associated with additional security at the state Capitol this year.

The Wyoming Highway Patrol meanwhile spent an extra $29,374, the Cheyenne Police Department $4,000, the Laramie County Sheriff’s Office $645 and the Wyoming Department of State Parks and Cultural Resources $697 on extra security at the ready that week, Gordon's office said.

Besides the National Guard troops, six sheriff's deputies were placed on standby for security in Cheyenne.

Wyoming Highway Patrol and Cheyenne police officials didn't immediately respond to requests for comment Friday on how many of their officers were placed on standby for security.