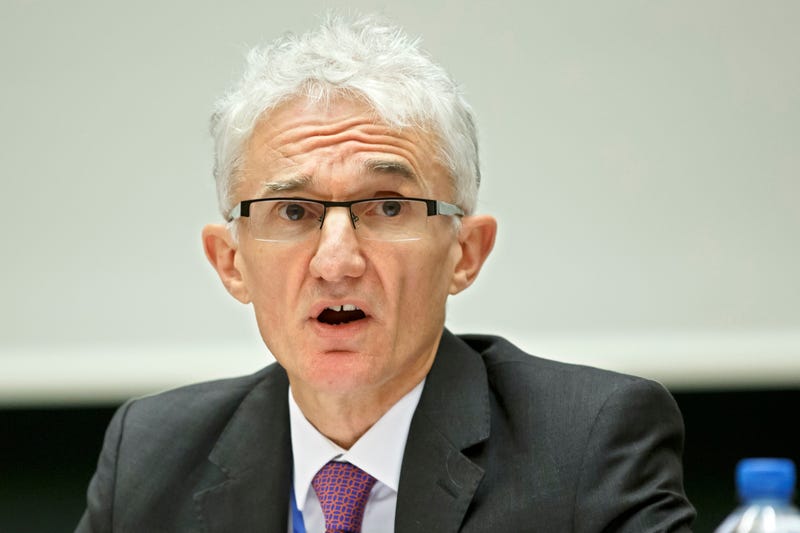 UNITED NATIONS (AP) — The outgoing U.N. humanitarian chief warned that “the explosion” in needs for humanitarian assistance in recent years will keep getting worse until major powers tackle the root causes of hunger and desperation -- conflicts, extremism, climate change, poor governance, corruption and violence, to name a few.

Mark Lowcock, who steps down Friday after four years, said in an interview with The Associated Press that unfortunately the world has been dealing with symptoms, including people displaced by fighting and natural disasters or at risk of famine, which is now stalking Ethiopia’s embattled Tigray region and Yemen.

In a very divided world, where the geopolitical system has failed to manage conflicts very well, he said, there has been a “failure of the leading powers" to tackle the causes.

“If the world wants to see less humanitarian suffering, you have to deal with the causes of that suffering,” Lowcock said. “If you tackle the causes, you can make progress, you can improve people’s lives.”

During his lifetime, the 58-year-old British economist said the world moved from having more than half the global population living in “the most extreme poverty” to less than 10% in that dire situation before the COVID-19 pandemic in early 2020.

The people and countries left out of that economic progress are “the ones enmeshed in humanitarian suffering,” he said.

Lowcock was highly critical of the world’s rich countries, and especially the Group of Seven leading industrialized nations, for “not acting much more aggressively and generously and protecting the poorest countries coming out of the pandemic,” not only with vaccines but supporting their economies, which “have taken the biggest hit in relative terms” and are “under huge strain.”

Rich countries pumped trillions of dollars into their economies to protect their citizens and their nations, and “that’s the right thing to do,” he said.

“But it would also have been a smart thing as well as a kind and generous thing to have spent a little bit of that money protecting the very poorest countries,” Lowcock said in the virtual interview on Wednesday.

It is also in the self-interest of wealthier nations, he said, because the problems that can brew in fragile countries — becoming havens for terrorism, places where climate change is hardest to tackle, sites where new diseases emerge and old diseases like Ebola reemerge — “come back to bite you if you don’t invest enough to contain the problems.”

Lowcock called for a much bigger effort to help poorer countries out of the pandemic.

Rather than just announcing it was donating vaccines, he said, the G-7 should have made clear that what they were doing was “a small down payment,” and that they would work with the larger Group of 20 major economies to do a lot more.

The G-7 leaders promised 1 billion doses for vaccine-hungry countries, far short of the 11 billion doses the World Health Organization said is needed to inoculate at least 70% of the world’s population and truly end the pandemic.

Lowcock said the G-7 announcement -- including 500 million doses from the United States and 100 million each from Britain and Canada -- is basically enough vaccine to reach about 10% of the people who need it in low- and middle-income countries.

He said the G-7 didn’t announce money to get the vaccine from the manufacturer into the syringes of health workers who can immunize people, stressing that there are “huge costs in the delivery system.” Some of the very poorest countries that got a little bit of vaccine but had no delivery systems gave some back, he said.

The G-7 should have made “a much more rounded, longer term commitment” to finance vaccine requirements, he said, and it should be challenging the G-20 “to step up and meet part of the share of the costs as well.”

By comparison, he recalled that in the much smaller financial crisis of 2007-2008, “the leading countries in the G-20 instructed the international financial institutions to provide a lot of assistance to the most vulnerable countries, and they bankrolled that.”

For the last 15 months, Lowcock said, he has been pressing the G-7 and the G-20 to provide a lot more economic help to the poorest countries.

“That has not happened through this crisis,” he said. “If more resources don’t come, then the pandemic is going to last a lot longer than it would otherwise do, and that will ultimately harm the rich countries as well as adding to the misery and suffering of the poorer countries.”

Lowcock called his last four years as the U.N.'s undersecretary-general for humanitarian affairs “challenging,” especially because “the causes of humanitarian suffering have been growing.”

He said the U.N. and the broader humanitarian community, whose “true grit” he has come to admire, have been able “to stave off the worst outcomes in these big disasters, essentially because we have raised quite a lot of money.”

In his first year, the U.N. raised $14 billion for its global humanitarian appeals, Lowcock said, and four years later “we raised $20 billion, so roughly a 40% increase over the period.”

But he said he worries that funding for humanitarian aid is voluntary, and there’s far too much reliance on a small number of countries. As a prime example, he said, 70% of the $20 billion raised last year came from the U.S., Germany, the European Union and the United Kingdom.

Historically, the system for humanitarian relief has been “far too reactive,” Lowcock said. “It’s waited for the problem to get almost