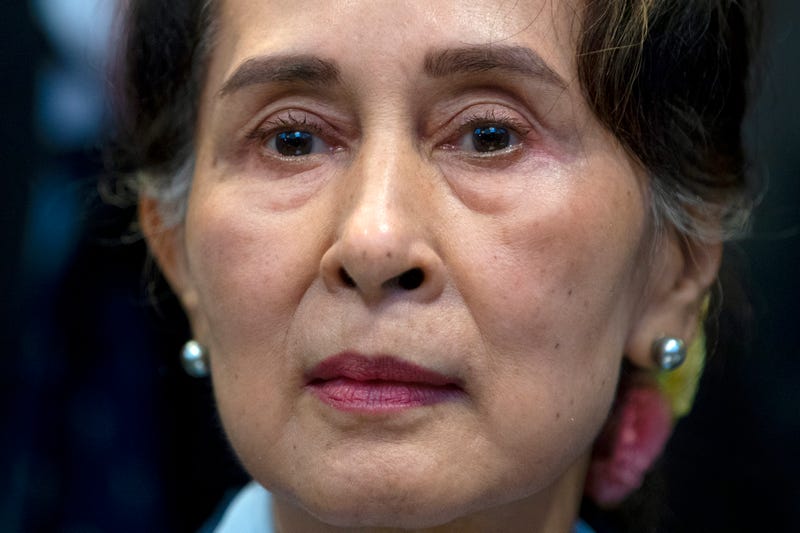 BANGKOK (AP) — The army takeover in Myanmar a year ago that ousted Aung San Suu Kyi not only unexpectedly aborted the country's fledgling return to democracy. It also brought a surprising level of popular resistance, which has blossomed into a low-level but persistent insurgency.

Senior Gen. Min Aung Hlaing, the commander of Myanmar’s military — known as the Tatmadaw — seized power on the morning of Feb. 1, 2021, arresting Suu Kyi and top members of her government and ruling National League for Democracy party, which won a landslide election victory in November 2020.

The military’s use of deadly force to hold on to power has escalated conflict with its civilian opponents to the point that some experts describe the country as being in a state of civil war.

The costs have been high, with some 1,500 people killed by the security forces, almost 8,800 detained, an unknown number tortured and disappeared, and more than 300,000 displaced as the military razes villages to root out resistance.

Other consequences are also significant. Civil disobedience hampered transport, banking services and government agencies, slowing an economy already reeling from the coronavirus pandemic. The public health system collapsed, leaving the fight against COVID-19 abandoned for months. Higher education stalled as faculty and students sympathetic to the revolt boycotted school, or were arrested.

The military-installed government was not at all anticipating the level of resistance that arose, Thomas Kean, an analyst of Myanmar affairs consulting for the International Crisis Group think tank, told The Associated Press.

“We saw in the first days after the coup, they tried to adopt a sort of business-as-usual approach,” with the generals denying they were implementing any significant change, but only removing Suu Kyi from power, he said.

“And of course, you know, that unleashed these huge protests that were brutally crushed, which resulted in people turning to armed struggle.”

The army has dealt with the revolt by employing the same brutal tactics in the country’s rural heartland that it has long unleashed against ethnic minorities in border areas, which critics have charged amount to crimes against humanity and genocide.

Its violence has generated newfound empathy for ethnic minorities such as the Karen, the Kachin and the Rohingya, longtime targets of army abuses with whom members of the Burman majority now are making common anti-military cause.

People opposed the army takeover because they had come to enjoy representative government and liberalization after years of military rule, said David Steinberg, a senior scholar of Asian Studies at Georgetown University.

Youth turned out in droves to protest despite the risks, he said, because they had neither families nor careers to lose, but saw their futures at risk.

They also enjoyed tactical advantages that previous generations of protesters lacked, he noted. Myanmar had caught up with the rest of the world in technology, and people were able to organize strikes and demonstrations using cellphones and the internet, despite efforts to limit communications.

A driving force was the Civil Disobedience Movement, founded by health care workers, which encouraged actions such as boycotts of military products and people not paying electricity bills or buying lottery tickets.

Kept in detention by the military, Suu Kyi has played no active part in these developments.

The ruling generals, who have said they will probably hold a new election by 2023, have tied her up with a variety of criminal charges widely seen as trumped-up to keep her from returning to political life. The 76-year-old Suu Kyi has already been sentenced to six years’ imprisonment, with the prospect of many more being added.

But in the days after the army’s takeover, her party’s elected members of parliament laid the groundwork for sustained resistance. Prevented by the army from taking their seats, they convened on their own, and in April established the National Unity Government, or NUG, which stakes a claim to being the country’s legitimate administrative body and has won the loyalty of many citizens.

The NUG has also sought to coordinate armed resistance, helping organize “People’s Defense Forces,” or PDFs, homegrown militias formed at the local and neighborhood levels. The military deems the NUG and the PDFs “terrorist” organizations.

With urban demonstrations mostly reduced to flash mobs to avoid crackdowns, the battle against military rule has largely passed to the countryside, where the badly outgunned local militias carry out guerrilla warfare.

When the military enters a village, “they’ll burn down some houses, maybe shoot some people, take prisoners and torture them — the sort of horrific abuses that we’re seeing on a regular basis," said analyst Kean.

“But when the soldiers leave, they lose control of that area. They don’t have enough manpower to maintain control when 80% to 90% of the population is against them.”

Some ethnic minority groups with decades of experience fighting the Myanmar military offer critical support to the PDF militia movement, including supplying training and some weapons, while also providing safe havens for opposition activists and others fleeing the army.

“We never accept a coup at all for whatever reason. The position of our organization is clear,” Padoh Saw Taw Nee, the chief of the Karen National Union’s foreign affairs department, told the AP. “We oppose any military dictatorship. Therefore, the automatic response is that we must work with those who oppose the military.”

He said his group began preparing immediately after the takeover to receive people fleeing from military persecution and noted that it played a similar role in 1988 after a failed popular uprising.

There is a quid pro quo — the NUG says it will honor the minority ethnic groups’ demands for greater autonomy when it takes power.

The military, meanwhile, keeps the pressure on the Karen with periodic attacks, including by air, that send villagers fleeing for safety across a river that forms the border with Thailand.

The support of the ethnic groups is seen as key to sustaining the resistance, the thought being that as long as they can engage the army, its forces will be too stretched to finish off the PDFs.

No other factors are seen as capable of tilting the balance in favor of the military or the resistance.

Sanctions on the ruling generals can make them uncomfortable — U.S. actions, especially, have caused financial distress — but Russia and China have been reliable allies, especially willing to sell arms. The U.N. and organizations such as the Association of Southeast Asian Nations are seen as toothless at best.

“I see the stage sort of set for a prolonged conflict. Neither side seems willing to back down or sees it as in their interest or a necessity to back down or to make concessions in any way to the other,” said analyst Kean.