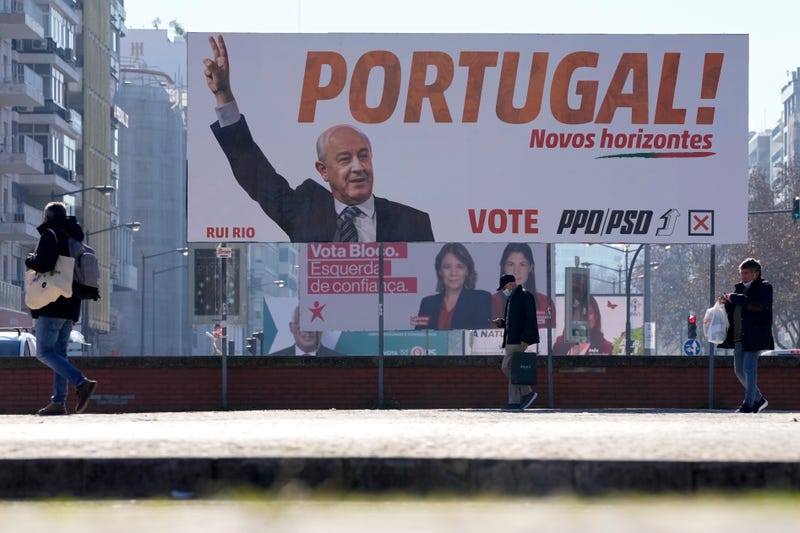 The familiar gripes include a tradition of low pay, a public service career structure that thwarts ambitions to get ahead in life, the nagging enticement of going to work abroad instead of staying at home, and politicians’ broken promises of improvement, especially for health workers like Orfao who have weathered the coronavirus pandemic.

Politicians “often talk about us,” Orfao says outside Lisbon’s Hospital Santa Maria, Portugal’s largest hospital. “But in practice, nothing comes of it.”

Ahead of Sunday’s election for a new parliament and government, those vexations are being heard again as the European Union country’s two main parties, the center-left Socialists and the center-right Social Democrats, compete for power. Those two parties have for decades collected around 70% of the vote, alternating in government, and opinion polls suggest a close race this time.

For voters like Orfao, a bigger change in the political landscape might be more welcome, because the same problems have dogged Portugal since the last century.

Low wages, meanwhile, have been spurring emigration since the 1960s. Orfao takes home around 1,300 euros ($1,466) a month, which the national statistics agency says is roughly the average pay in Portugal.

Some of Orfao’s colleagues are earning the same they did 15 years ago. Short-term contracts that deny workers, including many nurses, job security are another point of contention.

Over the past 10 years — a period that includes governments run by both the Socialists and the Social Democrats — some 20,000 Portuguese nurses have gone to work abroad, in an unprecedented drain of medical talent.

The Socialist government won a 2019 general election promising better pay and conditions for nurses, but apart from some tinkering with professional categories, it did little to improve nursing jobs. That minority government collapsed last November, halfway through its four-year term, when parliament rejected its 2022 state budget.

The spending plan is key. Portugal, a country of 10.3 million people, is poised to begin deploying 45 billion euros ($50.8 billion) from the EU to help fire up the economy after the COVID-19 pandemic. The new funds are seen as a new chance for Portugal to make up lost ground.

But the early election, intended to clarify the country’s direction, could backfire and leave Portugal back where it started two months ago — with a vulnerable minority government.

An apparent surge in support for smaller parties means the two main parties will likely have to cut a deal with one or more of them, with an extended period of political horse-trading expected.

“Forming a government has become more difficult because parliament will be more fragmented,” says António Costa Pinto, a professor at Lisbon University’s Institute of Social Sciences.

For Orfao, the Lisbon nurse, being saluted in politicians’ speeches and applauded by the public during the pandemic has been heartwarming. He feels, though, that he and his colleagues deserve more.

He paid for his own specialist ER training, done in his spare time over two years, to work at the state-run Santa Maria hospital. But under the public health service’s restrictive rules on promotions, “I’d have to live to be 120 to reach the pinnacle of my career,” he says.

After the pandemic hit, Orfao began changing his clothes twice after leaving his shift at the ER, dreading he might take the virus home and infect his wife, or his toddler son, or his father who was battling cancer.

Sunday’s ballot is taking place amid a surge in new cases blamed on the highly infectious omicron variant, with hundreds of thousands of infected people confined at home. Authorities are allowing infected people to go to polling stations, with a recommendation they go during a less busy evening time slot.

Orfao isn’t very comfortable with that. Last week he was still mulling whether to cast his vote, even though he thinks he should.

“It makes me uneasy. I can’t deny it,” he says. “They should have taken decisions long beforehand to (hold the election) safely.”