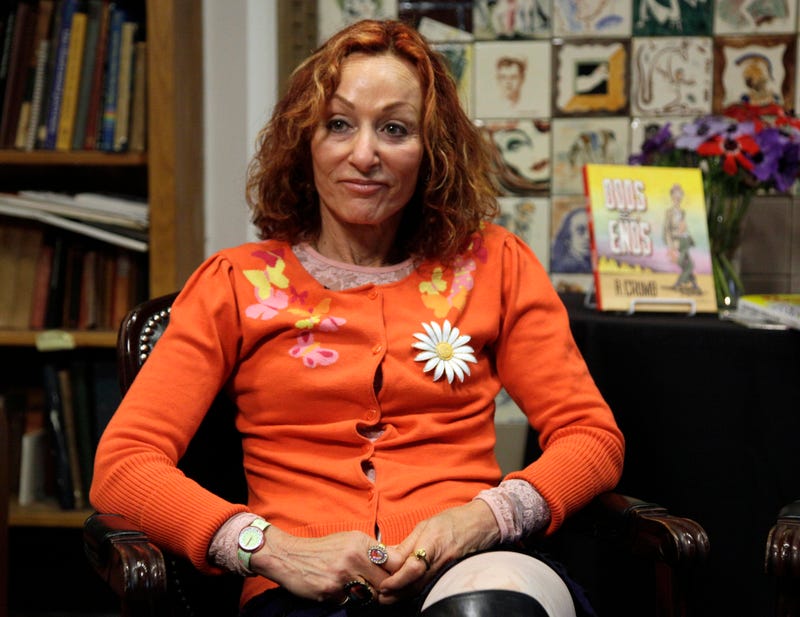 Aline Kominsky-Crumb, an American cartoonist known for her feminist themes and often brutally frank, highly personal and self-critical work, has died at the age of 74.

Kominsky-Crumb, who was a close collaborator of her cartoonist husband, Robert Crumb, died of cancer Tuesday at their longtime home in France, said Alexander Wood, manager of the website that sells Crumb’s work.

“She was the hub of the wheel within her family and community,” the website wrote in announcing her death. “She had a huge amount of energy which she poured into her artwork, her daughter, her grandchildren and the meals which brought everyone together. “

Kominsky-Crumb was known for work that was not only autobiographical but often bracingly sexual — focusing on her insecurities — and explicit. Or just raunchy. An early cover of the“Twisted Sisters” anthology — on which she collaborated with cartoonist Diane Noomin during her early years in the Bay Area — depicted her sitting nearly naked on the toilet, wondering how many calories there were in a cheese enchilada.

“People said to me, ‘That is so outrageous, how could you draw yourself sitting on a toilet?'” she said in a 2019 video interview. “I said, ’I don't know, it seemed natural to me.'” She noted that could only draw on herself in her work, because “it's the only thing I know about.”

Kominsky-Crumb described as creative influences both German Expressionist art and the late Jewish comic Joan Rivers, whose standup routines she admired partly for their self-deprecating nature. Much more recently, she also admired Lena Dunham and her show “Girls,” and was thrilled to learn that Dunham had actually said she was influenced by Kominsky-Crumb's artwork.

“She has something in common with Lena Dunham, Amy Poehler, Amy Schumer, Sarah Silverman, women who are trying to grapple with their identities in a way that is not prettified,” Spiegelman, author of “Maus," said in a 2018 article in The New York Times. “They are just trying to live and breathe as women with all their contradictions. And it’s a liberated and liberating way of looking at oneself.”

Kominsky-Crumb was born on Long Island, in the suburb of Five Towns.

“Reading and drawing and painting were the things that saved me from a very difficult childhood,” she said in the 2019 interview, “with somewhat harsh parents."

She studied art in her college years at The Cooper Union in Manhattan, and later relocated to Arizona, earning a bachelor’s in fine arts at the University of Arizona. She met Crumb — often known as R. Crumb — in the early 1970s in San Francisco, where she became part of the all-female Wimmen’s Comix collective before breaking with the group and starting “Twisted Sisters” with Noomin, who died in September.

The break in the collective was between two factions with different approaches, she said — those who were “very militant feminists” and others, like her, “who were feminists but also liked men.”

“I felt like I wanted to have as much sex as possible and be as promiscuous as I wanted to be on my own terms,” she said. “Just as men did.”

With Crumb, whom she married in 1978, she produced a series of comics called “Aline and Bob's Dirty Laundry” about their family. They had a daughter, Sophie, who is also a comics artist. In the early 1990s, the family moved to France, settling in a medieval village in the Languedoc-Roussillon region. A documentary about their life, “Crumb,” was released in 1994.

Among her works, Kominsky-Crumb published a graphic memoir, "Need More Love," in 2007, a collection of her artwork over four decades. Her retrospective “Love That Bunch” was published in 1990 and expanded in 2018.

“I can't help seeing the absurdity of myself at all times,” she said in the 2019 interview, trying to describe her ethos. “That's just the consciousness that I have and that I've always had of myself, as being an absurd creature on this planet.”

Kominsky-Crumb is survived by husband Robert, 79, and daughter Sophie, 41.