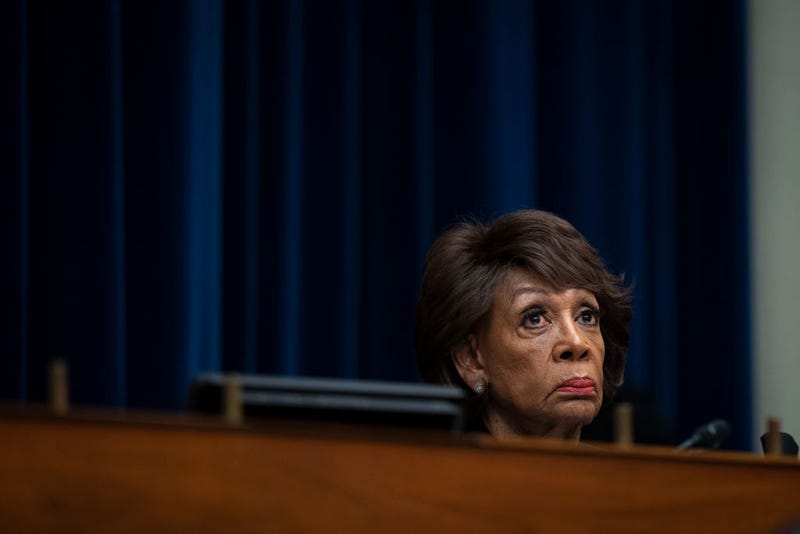 WASHINGTON, DC - JULY 1: Rep. Maxine Waters (D-CA) attends a Select Subcommittee on the Coronavirus Crisis hearing about how to counter vaccine hesitancy, on Capitol Hill July 1, 2021 in Washington, DC. According to the committee, a recent survey shows that up to 20 percent of Americans continue to say they will refuse the vaccine or are unsure about the vaccine. Photo credit Drew Angerer/Getty Images
By City News Service

LOS ANGELES (CNS) - Rep. Maxine Waters, D-Los Angeles, asked today for a federal probe into the reported existence of an alleged gang of Los Angeles sheriff's deputies at the Compton Sheriff's Station who call themselves the "Executioners."

"I write to ask that the United States Department of Justice take immediate action to address the reported existence of a rogue, violent gang of law enforcement officials, who call themselves the `Executioners,' operating within the Los Angeles Sheriff's Department, specifically the LASD Compton station," she wrote.

A sheriff's spokeswoman told City News Service that a statement from Sheriff Alex Villanueva would be forthcoming. He has insisted on multiple occasions that he has cracked down on deputy gangs.

Waters wrote that a deputy acting as a whistleblower provided sworn testimony identifying more than a dozen deputies with matching tattoos to symbolize their association with the alleged gang.

"Deputies at the LASD Compton Station reportedly `chase ink', a slang term for a deputy who attempts to win favor with the `Executioners' by committing violent acts in hopes of receiving the group tattoo denoting gang membership," Waters wrote.

"The gang allegedly sets illegal arrest quotas, threatens and harasses fellow deputies, and holds parties after shootings, called `998 parties,' which are in part a celebration that a new deputy will be inked by the gang," Waters said. "The tattoos worn by the police gang reportedly feature Nazi imagery in disturbing evidence of the violence perpetrated against the Los Angeles community by the LASD gang."

The whistleblower reportedly identified two deputies involved in the death of 18-year-old Gardena resident Andres Guardado in June 2020 as members of the "Executioners."

The shooting of Dijon Kizzee in South Los Angeles in August 2020 was also described by Waters as an " example of the LASD's excessive and brutal tactics in the Los Angeles community."

The sheriff's department has said Guardado was reaching for the gun when he was shot while working as what has been described as an informal security guard for a nearby auto body shop. Guardado's family has filed a lawsuit against the county alleging wrongful death and civil rights violations.

Kizzee, 29, was killed after sheriff's deputies allegedly tried to stop him for riding a bicycle in the wrong direction. The sheriff's department contends Kizzee was fatally shot after he picked up a handgun he had dropped during a struggle with one of the deputies.