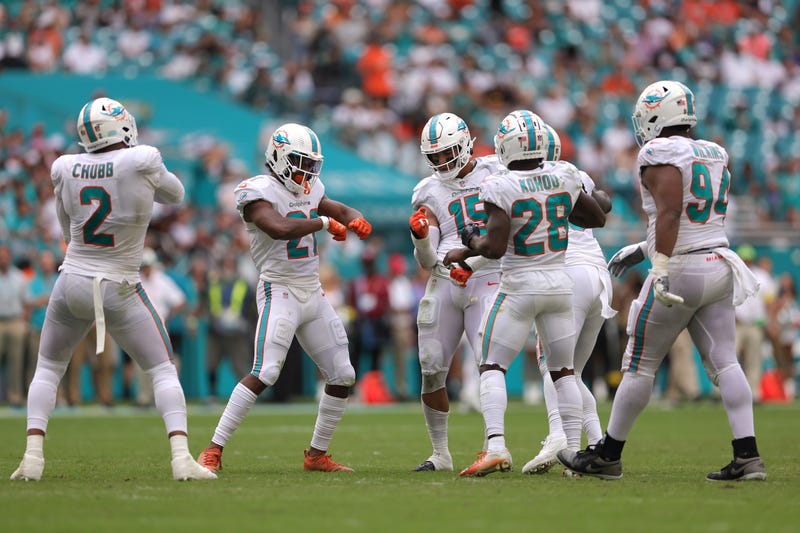 Dolphins vs 49ers (-4)
It’s become impossible to ignore the fact that the Dolphins are unbeaten when Tua Tagovailoa is healthy. Miami’s only three losses this year came in games that he missed or left early due to injury. However, that doesn’t necessarily make the Dolphins a good bet as road underdogs against the 49ers this week. Tagovailoa and company will be facing a San Francisco defense that’s allowed just 40 total points during the team’s current four-game winning streak. Outside of the Chiefs, few teams have found much success against the San Francisco defense. Meanwhile, the Miami defense has been unreliable, allowing over 20 points per game, even during the team’s five-game winning streak. With Christian McCaffrey bringing more balance to the San Francisco offense and Jimmy Garoppolo not throwing an interception and only taking five sacks during the last four games, the 49ers should get enough from their offense to allow their defense to keep leading the way in a win over Miami. Check in with BetQL to get the most updated NFL point spreads before the game kicks off, so you can ensure you get the best betting line possible.

Kansas State vs TCU (-2.5)
Before the season, nobody expected the TCU Horned Frogs to be in the College Football Playoff discussion. But with a win over the Kansas State Wildcats in Saturday’s Big 12 Championship Game, the Horned Frogs will accomplish just that. When these teams met earlier this season, TCU had to rally to overcome a 28-10 deficit, ultimately winning 38-28, so the Wildcats can be dangerous. But with K-State quarterback Adrian Martinez banged up and unlikely to be the team’s full-time quarterback on Saturday, the Horned Frogs will catch a break. While backup Will Howard is a competent quarterback, the TCU defense will be able to focus a little more attention on star running back Deuce Vaughan. If they can slow him down, Max Duggan and an offense that’s averaging 41.3 points per game this season should find a way to win this game by at least a field goal. To check out the latest spreads and get college football picks for every conference championship game, check out BetQL, which offers updated odds and picks from our proven computer model.

Trail Blazers vs Jazz
The Portland Trail Blazers are desperate to end their current slide when they visit the Utah Jazz on Saturday. The Blazers have lost three in a row and seven of their last eight games. They’re also just 2-6 ATS during that stretch despite beating the Knicks as a road underdog. Obviously, the absence of Damian Lillard has played a big role in those struggles. He’s missed the last six games and isn’t expected to play on Saturday. Meanwhile, the Jazz only recently ended a five-game losing streak. Dating back even further, Utah is just 3-8 in the team’s last 11 games. During that stretch, they’ve lost four of the five games in which they’ve been favored. That’s a disturbing trend for a team that’s also coping with an injury to a key player, as Mike Conley has been sidelined since  a November 19 win over the Trail Blazers. Nevertheless, with Portland failing to beat the spread in three of the last four games in which the Trail Blazers have been underdogs, the Jazz remain the best bet in Saturday’s matchup. To get NBA computer picks and NBA spreads for every game this weekend, check out BetQL.

Boston College vs Duke
ACC play begins this weekend for the no. 17 Duke Blue Devils when they host the Boston College Eagles on Saturday. Jon Scheyer’s team has already taken a couple of losses this season, although both came against ranked teams. Perhaps more importantly, the Blue Devils are coming off a top-25 win over Ohio State and also knocked off a quality Xavier team last week. Those wins should signal that Duke is ready for ACC play, especially against Boston College, a perennial ACC basement dweller. The Eagles were 13-20 and are still rebuilding under second-year coach Earl Grant. Boston College is just 5-3 this season, already losing to Maine and Tarleton before getting blown out by Nebraska 88-67 in the ACC/Big Ten Challenge this week. The Eagles surely aren’t ready for a trip to Cameron, making Duke a safe bet to win going away and cover the spread. For college basketball expert picks for every college basketball game, head over to BetQL, where you can find updated odds, public betting data, and picks from a proven computer model.

If you want to get in on the action yourself this week check out the risk free bets available in your state. You can bet BetQL’s best bets this weekend risk free when you sign up for a new sportsbook.