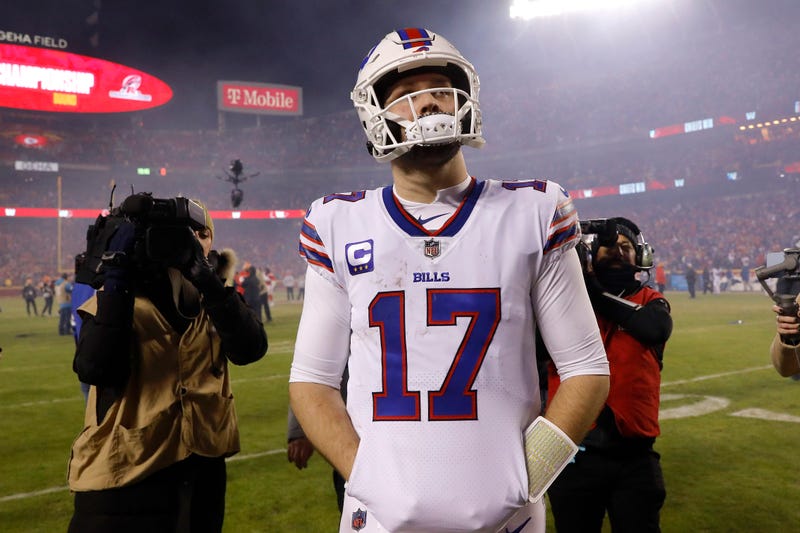 Buffalo Bills superstar quarterback Josh Allen made just one mistake during the team's divisional-round battle against the Kansas City Chiefs on Sunday. With a trip to the conference championship game on the line, he should've called for heads instead of tails.

Despite orchestrating two game-winning drives late in the fourth quarter -- only to see them expunged by Chiefs star Patrick Mahomes in miraculous fashion -- Allen's lost coin-toss in overtime wound up dashing the Bills' title hopes. The extra period lasted just five minutes, and Kansas City ultimately outlasted Buffalo, 42-36, in a thrilling instant classic at Arrowhead Stadium. Remarkably poor luck for Allen, who spent all of overtime on the sideline.

"The Buffalo Bills have been disappointed. Another amazing season, another step forward by Allen, cementing himself as worthy of the $40 million he will get as a quarterback" JR said during the JR SportBrief show on Monday night. "He's in the Mahomes range, and he showed why. And it's disappointing that he didn't get that chance in overtime. But as he said, those are the rules...

"It'd be nice if the rule was changed. It'd give us more football. We would get a little bit more excitement. But I can't complain about the fairness. The rule is fair. It's overtime -- you don't want to go there. Handle business in the first 60 minutes, and you don't have to run the game of chance. You don't have to flip a coin... Let's get away from, what's not fair. The game was fair, the rule was fair. Everybody knew the rules, and unfortunately, the Bills lost."

Allen did everything in his power to carry the Bills. He racked up 329 passing yards with four touchdowns -- all of which went to wide receiver Gabriel Davis -- and also recorded a team-high 68 rushing yards. But, the mammoth Allen-Davis connection with 13 seconds left in the fourth quarter didn't clinch a win. With a pair of passes from Mahomes, Kansas City somehow moved 44 yards downfield, and kicker Harrison Butker drilled a game-tying, 49-yard field goal.

After the game, Allen didn't complain about the NFL's overtime rules, and how he didn't get a chance with the ball. He told reporters that Buffalo didn't make enough plays, and "we'd be celebrating" if the critical coin toss worked out in their favor. According to ESPN Stats & Info, the Bills were given a 91-percent win probability with 13 seconds remaining, up 36-33.

JR's complete thoughts on the NFL divisional-round games can be accessed in the audio player above.