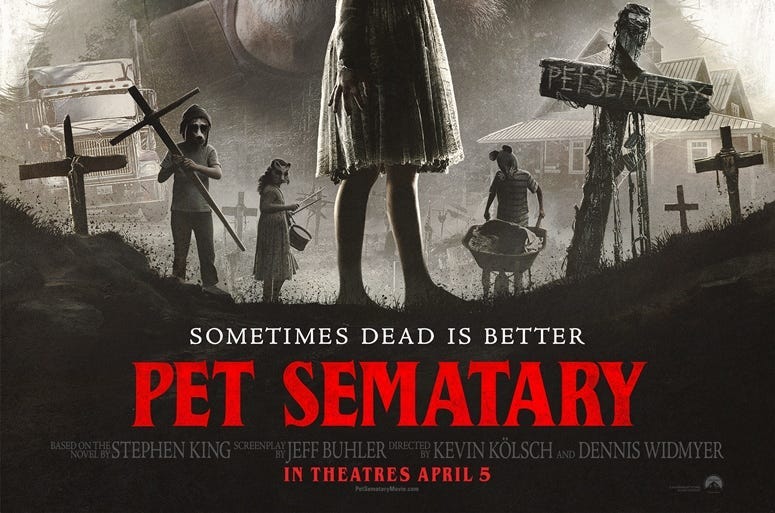 The Best Of Enemies - Rated PG-13
Based on a true story, The Best Of Enemies, centers on the unlikely relationship between Ann Atwater (Taraji P. Henson), an outspoken civil rights activist, and C.P. Ellis (Sam Rockwell), a local Ku Klux Klan leader who reluctantly co-chaired a community summit, battling over the desegregation of schools in Durham, North Carolina during the racially-charged summer of 1971. The incredible events that unfolded would change Durham and the lives of Atwater and Ellis forever.
Critics: "57% LIKE", according to Rottentomatoes.com
Blake: those I trust say the familiar territory in The Best of Enemies is illuminated well by Taraji P. Henson and Sam Rockwell. Too bad the script isn't as good as they are. 2.5 of 5 stars
Pet Sematary - Rated R
Based on the seminal horror novel by Stephen King, Pet Sematary follows Dr. Louis Creed (Jason Clarke), who, after relocating with his wife Rachel (Amy Seimetz) and their two young children from Boston to rural Maine, discovers a mysterious burial ground hidden deep in the woods near the family's new home. When tragedy strikes, Louis turns to his unusual neighbor, Jud Crandall (John Lithgow), setting off a perilous chain reaction that unleashes an unfathomable evil with horrific consequences.
Critics: "Sometimes remade is better. 72% LIKE", per Rottentomatoes.com.

Blake:  my sources say if you have seen the original... DON'T... until after you've seen this remake. Enjoy this version, then watch the original, and compare. There's a big difference in scary versus creepy. You be the judge to decide which it is! 3 of 5 stars.

Shazam! - Rated
We all have a superhero inside us, it just takes a bit of magic to bring it out. In Billy Batson's (Asher Angel) case, by shouting out one word--SHAZAM!--this streetwise 14-year-old foster kid can turn into the adult Super Hero Shazam (Zachary Levi), courtesy of an ancient wizard. Still a kid at heart--inside a ripped, godlike body--Shazam revels in this adult version of himself by doing what any teen would do with superpowers: have fun with them! Can he fly? Does he have X-ray vision? Can he shoot lightning out of his hands? Can he skip his social studies test? Shazam sets out to test the limits of his abilities with the joyful recklessness of a child. But he'll need to master these powers quickly in order to fight the deadly forces of evil controlled by Dr. Thaddeus Sivana (Mark Strong).
Critics: according to Rottentomatoes.com. "An effortlessly entertaining blend of humor and heart, Shazam! is a superhero movie that never forgets the genre's real power: joyous wish fulfillment. 93% LIKE."

Blake: my trusted sources day this movie... is a home-run!!! Fun, not self-centered-serious, and just what D.C. Comics needs to freshen it's super-hero center! There's plenty of heart, just enough laughter, and a sense of child-like energy that everyone needs to occasionally experience. 5 of 5 stars! SHAZAM!!!