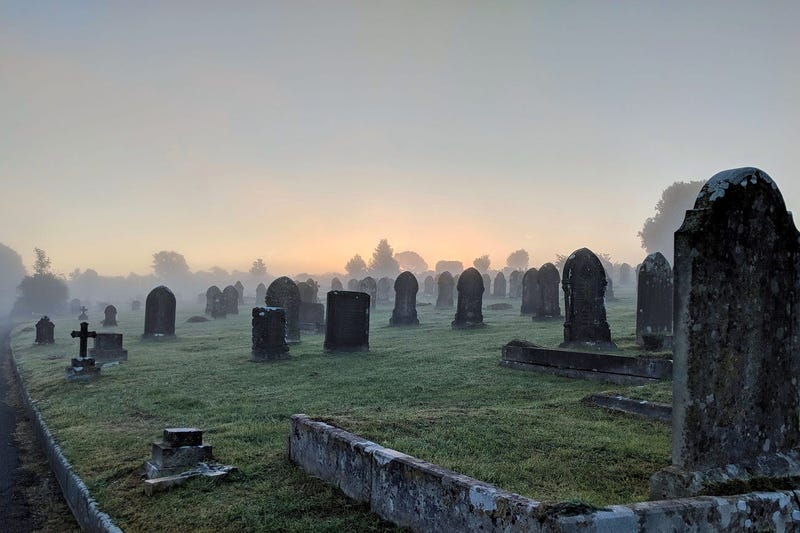 Photo credit (Photo by iStock / Getty Images Plus)
By Miles In The Morning, 98.7 KLUV

Not to be morbid, but what if Miles in the Morning just up and died? Who would write their obituaries? Who can be trusted with such a responsibility?

No one! The answer is no one! We need to put in a good light. So naturally, we each wrote one for ourselves. Some a little more truthful than others, but funny nonetheless.

Let's kick off this funeral party with none other than Jeff Miles!

"Jeffrey Allen Miles was a loving and kind father…..sarcastic at times….well maybe ALL THE TIME.
He is survived by a loving wife (who let’s face it was way out of his league) and two children, Amelia and Liam, who let’s be honest their lives would be a whole lot better if they had eaten more vegetables growing up.  Amelia had one goal…don’t turn out like Ariana Grande, which is still debatable, and Liam, who let’s be honest was used to get some extra likes when needed on the Gram
Jeff lived a great life working with some great people who were made that way by Jeff’s presence alone….you can thank him when you get to Heaven.  Our off air debates alone were awe inspiring
Raised in a small town in Texas his biggest regret is that he never got the chance to try a Dr Pepper shake from Whatburger.  And will be buried behind the Buccees in Temple with a big sack of beaver nuggets."

Up next, we've got David Rancken!

"David Rancken dedicated many years to a career in radio and television.
An avid tennis player, David missed out on a career on the courts due to one major flaw in his game.  He had a pro style serve, and a sixth grade net game.  One major mistake happened in a pro-am when he hit Serena Williams in the backside with a serve. After the dream of playing died, he went on tour with both the WTA and the Men’s tennis tour as a stadium announcer. He married twice, the second one stuck.  His wife sat by his side as he breathed his last.  They never had any children, but did manage to rescue a half dozen cats over the course of their lives.  This side of the family tree ends.  Fortunately, the cousins all made up for any future heirs to carry on the name.
Yes, they will be burying him in shorts.See you on the other side.  I’ll be waiting.   Hope you get here."

And pulling up the rear, Rebekah Black.

"Rebekah Black, a long-time resident of North Texas and perhaps the greatest morning show host of all time has passed away. Ironically, she died Tuesday, April 8th 2019, at 8:37AM, doing what she loved, talking. Her last words were, Jeff Miles that was the worst dad jo….uggggg, gurgle.
Born in 1981 in Dallas, TX. Rebekah received numerous degrees, awards, and accolades from the University of Texas in Austin back in 2004. Her 2 favorites degrees…A Bachelor Degree in Radio TV and Film as well as Bachelor’s Degree in Criminology.
Now most of you know Rebekah as the fun-loving morning show host for 98.7 KLUV in Dallas Fort Worth. However, she took on a very different role by night. Some might call her a super hero, fighting crime with a 6 pack, bikini, and 6 inch heels. Her most notable claim to fame is that she single-handedly defeated Thanos and saved the Avengers from utter doom, as well as all mankind. We will forever be in her debt.
Rebekah is survived by her husband of 11 years, Brad Pitt. She might know him from such shirtless scenes as Thelma & Louise, Legends of the Fall, Troy, Fight Club, and Meet Joe Black."

Go ahead and write one for yourself! It's fun!