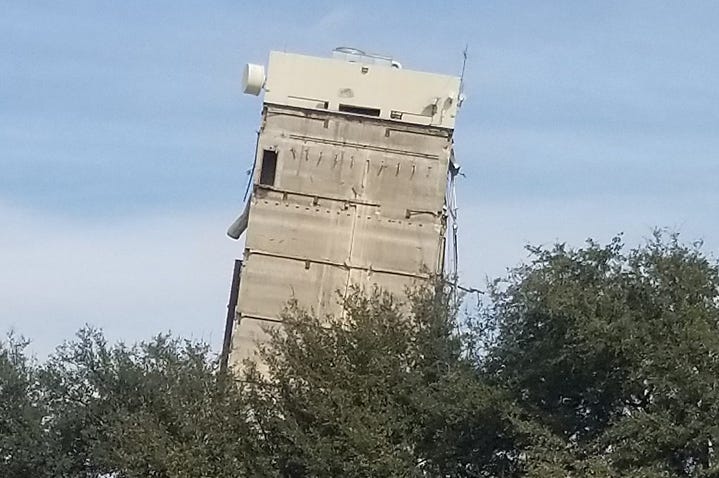 It's been 11 days since the former Affiliated Computer Services building was scheduled for demolition. After an unsuccessful implosion via dynamite, the Llloyd D. Nabors destruction company brought out a wrecking ball.

Fortunately (for those of us who are fans of the newest DFW icon), that didn't work either. Let the memes begin. Here are the best posts we've found around the internet regarding the Leaning Tower of Dallas.

*Justin Mitchell, the guy who started a petition to keep it as a tourist attraction because "You wouldn't tear down the Leaning Tower of Pisa or the Great Pyramids of Giza and replace them with condos, would you?"

*Lucas from Do214 and Central Track creating this local masterpiece.

*Richards Group seizing an opportunity to advertise for Choctaw Casino.

*Fort Worth Police Department sending back-up to get the job done.

*LegoLand making a miniature replica including other Dallas landmarks like American Airlines Center.

there's a lego set for everything!https://t.co/zxMeojOQig

*LeaningTower joining Twitter and flirting with the local media.

You are the true Dallas hero. You are everlasting. I know I'm kind of young for you, being only 6 days old, but I've had a crush on you pretty much my entire life. Not sure how much longer I'll be on this Earth. Would you want to grab drinks? My treat. 😘 https://t.co/881C4Npws5

*The "wrecking ball" getting in on the action to talk smack (and ultimately getting suspended, then reinstated).

They didn’t get my good side..... pic.twitter.com/JFN53EaBmM

*CBS predicting things that will happen before the tower goes down.

Name things that will happen before the "Leaning Tower of Dallas" comes down. We'll start:

*Luka Doncic rocking a "Remember the Tower t-shirt on his birthday.

Happy birthday @lukadoncic! Dallas loves you. Oh, and the shirt looks good on you! #leaningtowerofdallas #rememberthetower

*Perot Museum offering to lend a hand from their dinosaut exhibit.

That is a Dino-mite idea! Best of luck! https://t.co/di0HbRqGyk

A post shared by LeaningTowerGallery (@leaningtowerartgallery) on Feb 25, 2020 at 10:21am PST

Give the people what they want! Leaning Tower of Dallas tee is now live on the site. Online only. 👀

The site is the future home of a 27-acre mixed use facility called The Central. According to their PR team, the teardown process could take weeks. We have a live stream for when the building finally does cave.