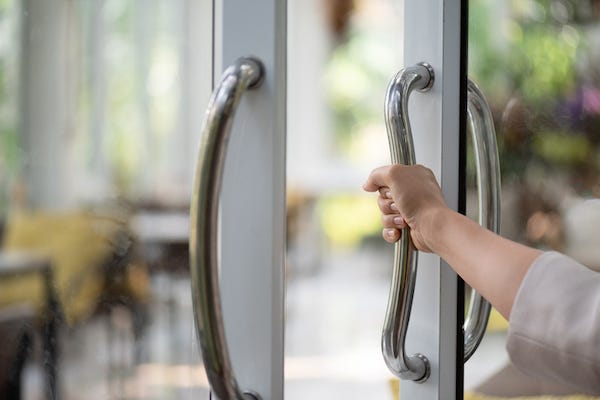 Our Dr. Miles Intervention this morning comes from a situation Rebekah found herself in a couple of days ago.

While exiting the building one day after work, she was walking ahead of a man she did not know.  She got to the door first, and proceeded to open it for the guy.  HOWEVER, the dude insisted Rebekah made her way out first.  He refused to let her open the door for him.

Now was it chivalrous for this man to refuse to let Rebekah open the door for him, as chivalry usually dictates men abiding by a set of standards and morals regarding the treatment of women.

But was it actually sexist for this man to insist Rebekah go through the door first, no matter what?

A woman named Runjhun Noopur explained on YourTango that sometimes, she doesn’t know if she should feel “offended or flattered” because sometimes the gesture of chivalry can feel “so utterly idiotic and patronizing.”

Noopur wrote that one time, a male friend insisted on escorting her down a snowy hill, despite the hill being less than 100 meters long, and she was in no evident danger of being “eaten by wolves, animals, or humankind.”

Still, the friend insisted he escort her down the hill because “it was how a lady should be treated.”

Noopur says it was a “strange mixture of adorably sweet intent and annoyingly patronizing alpha male instinct. I settled for it being adorable but made it a point to tell him that it was kind of patronizing.”

https://t.co/7mMHmKqOfD What The Definition Of True Chivalry Really Is — According To A Woman https://t.co/qUQIXCHmLX pic.twitter.com/6ZaJrNWHRf

So what is the true definition of Chivalry?  Do we even need it?  Are there any types of Chilvary we need to move on from?