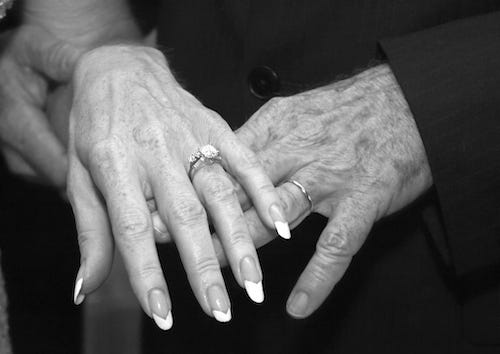 Their daughter Sue Bilodeau told the Des Moines Register, "Mom had mentioned, 'We got married on a two-day notice while Dad was just on a short leave ... before he went overseas in World War II. And we didn't have time to plan a big wedding and we didn't have a photographer.'"

After the war changed their plans, the Kings couple finally got take the wedding photos they've always dreamed of on the day they married in 1941.

Bilodeau said, "They escorted my dad outside, sat him down and we put a little handkerchief around his eyes. We walked Mom down the back steps and across the yard, and then she stood in front of Dad, and then I was able to take off his handkerchief. I said, 'Are you ready to see your bride?'"

When Royce saw Frankie, Bilodeau said he had "the biggest smile in the world, and he didn't stop smiling."

Royce King had "the biggest smile in the world" when he saw his bride, Frankie, walking down the aisle in their Oelwein backyard last month. https://t.co/KwLvt2DwXy

When asked what it meant to Royce and Frankie to finally have their wedding photos taken all these years later, Bilodeau said laughing, "Dad said, 'Having Frankie by my side ... and mom said, 'As my dad used to say, I always think about this little saying, 'Lord, give me patience and give it to me now.'"