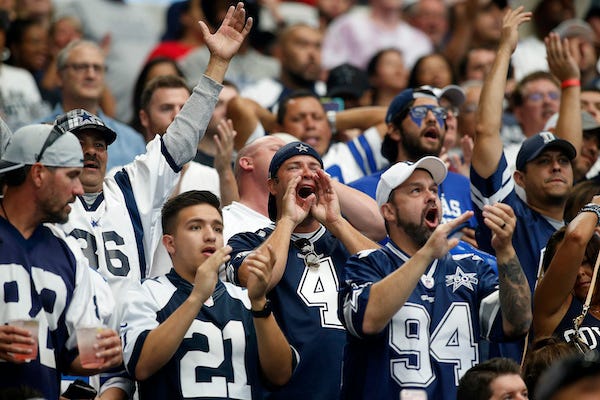 Dallas Cowboys fans cheer during the second half of a game against the Los Angeles Rams on Sunday, Oct. 1, 2017 at AT&T Stadium in Arlington, Texas Photo credit TNS
By Alex Luckey, 98.7 KLUV

It was not a pretty scene last night at AT&T Stadium following a watch party for the playoff game between the Cowboys and the 49ers.

Following the ‘Boys’ ugly loss, multiple fights broke out around the stadium, and all appear to be between Cowboys fans looking to let out a little frustration.

Per the New York Post, the watch party was held at the Miller Lite House located on the stadium’s plaza, and following the Cowboys’ loss to the 49ers 19-12, the fists started flying between fans and security guards alike.

No word yet on any potential injuries, or if any arrested were made.