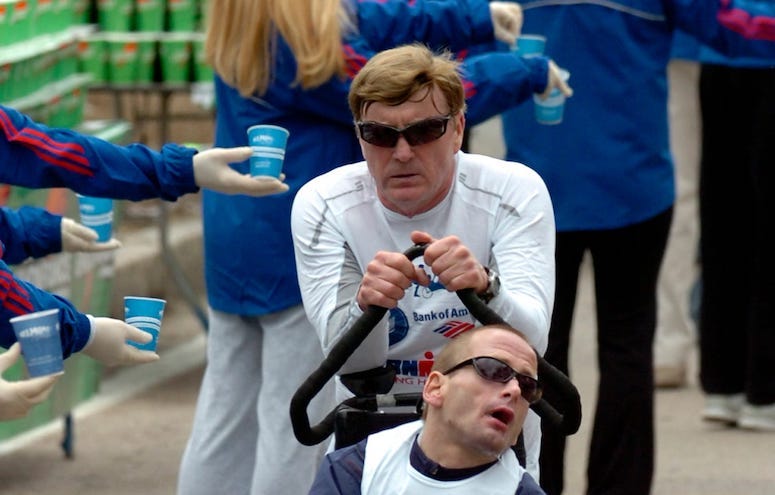 Team Hoyt is the incredible story of a father and son.

Dick Hoyt pushed his son Rick, who is quadriplegic and has cerebral palsy, through 32 Boston Marathons in a custom-made racing wheelchair.

Together, they were known as Team Hoyt.

Unfortunately, Dick passed away peacefully in his sleep at his Massachusetts home earlier this week, as confirmed by another of his sons, Russ.

Team Hoyt competed in more than 1,000 total races according to Yahoo!, including six Ironman Triathlons. Dick would use a rope attached to his body to pull Rick in a boat during the 2.4 mile swimming portion.

We mourn the passing of Dick Hoyt.

In 1988, IRONMAN and its community were introduced to the trailblazing father-son team of Dick and Rick Hoyt at the IRONMAN World Championship. While they didn’t finish that first year further history would be made the very next year.

The Boston athletic community mourned the passing of Dick Hoyt, including the Boston Athletic Association who said Dick was "not only a fan-favorite who inspired thousands, but also a loyal friend and father who took pride in spending quality time with his son Rick."

We are tremendously saddened to learn of the passing of Boston Marathon icon Dick Hoyt. Dick personified what it means to be a Boston Marathoner, finishing 32 races with son Rick. We are keeping his many family & friends in our prayers. https://t.co/glau0ryh4R pic.twitter.com/SYmvZfezW7

We are deeply saddened by the passing of Dick Hoyt.

For decades Team Hoyt has exemplified perseverance, love, and compassion, as Boston Marathon icons and as a family.

We send our thoughts to the entire Hoyt family. They will forever be an inspiration. 💙💛 pic.twitter.com/5SXVX4V7ce

For decades, Team Hoyt has been a shining example of determination and spirit, inspiring all of us every April at the Boston Marathon.

Today, the Bruins mourn the passing of Dick Hoyt and send our thoughts and best wishes to the Hoyt family. pic.twitter.com/aYd7JLf9Ye

Our thoughts are with Rick Hoyt (SED’93) and his family as they mourn the passing of his father, Dick.

As inspiring of a father-son relationship you’ll ever find. pic.twitter.com/O0g5ZNOyCV

According to Russ, Dick had an ongoing heart condition that "just got the better of him." He and brother, Rob, told the news to Rick.