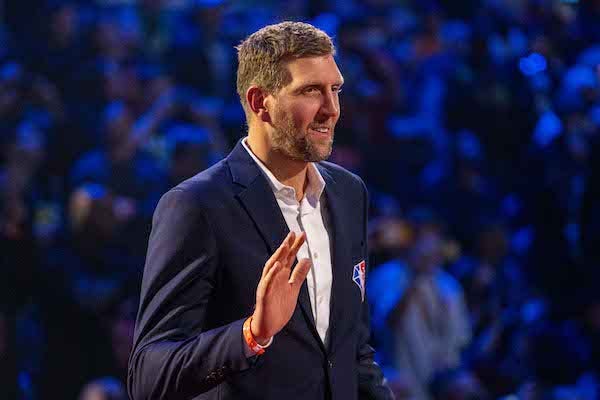 When Dirk Nowitzki first joined the Mavericks, he inquired about wearing 14 on his jersey, the number he wore while playing in his native Germany for DJK Würzburg.

Unfortunately, 14 was already being worn by Robert Pack, so Dirk just flipped the numbers around and started wearing 41.

The no. 41 now hangs in the rafters, and Pack left the Mavs after the 2000 season.  Still, whenever Dirk played in international competition for Germany, he always wore 14.

Well now, no. 14 will hang in the rafters, as the German basketball federation DBB announced they will be retiring Dirk’s jersey, the first time the federation has ever retired a number.

Dirk said in a statement via the Mavs, “I felt honored above all when this idea was presented to me by the DBB.  It was a nice surprise and I’m already excited about what awaits me in Cologne.

“As an ambassador of FIBA EuroBasket, I’m looking forward to exciting games with great teams and hope that the fans in Cologne and Berlin will ensure full arenas and a great atmosphere.”

He also helped Germany qualify for the 2008 Olympics in Beijing, where he was the country's flag carrier at the games' opening ceremony.

2008 Summer Olympics: Dirk Nowitzki serves as Germany’s flag bearer for the opening ceremony in his only Olympic appearance

Think this is the best moment of @swish41’s career? Vote in our Dirk Madness bracket: https://t.co/CHqrigJ5nh#MFFL pic.twitter.com/S3ev64LBoZ

DBB president Ingo Weiss said, “If anyone deserves it, it’s Dirk.  He has always been willing to play for Germany, putting in incredible performances in 153 international games for the men.

“Dirk is much more than just the outstanding player.  As a socially committed family man, he has always had a heart for the weaker members of society, and his special concern has always been for the next generation of players.

“I am pleased that we have found a suitable setting to honor Dirk.”