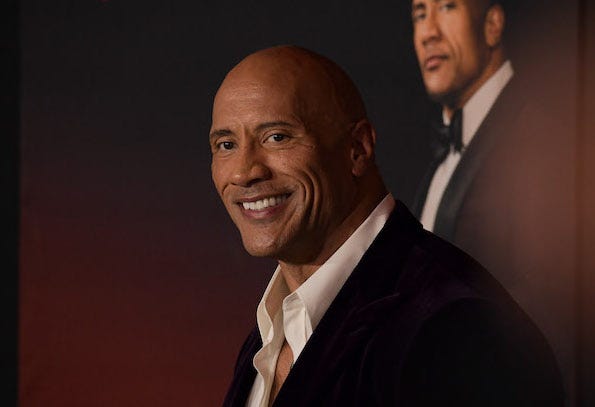 Dwayne Johnson surprised an audience that gathered to watch his new film Red Notice with free concessions, shoes, tequila, energy drinks and ice cream, though he saved the biggest surprise of all for Navy veteran Oscar Rodriguez.

Johnson addressed the crowd in front of the auditorium saying, "I also wanted to do something BIG… something MASSIVE… something unforgettable for one fan. There’s a dude here, I read his story and I was really impressed by his story. I want to highlight him. His name is Oscar Rodriguez."

Johnson brought Rodriguez down where he gave the veteran a huge hug, along with the keys to the actor's own, personal truck!

Per Deadline, Johnson told Rodriguez, "You do a lot of good for people, brother. The gym. The church. Your mom. Women. Women who need that support. Who are going through it," and wanted to reward him for just being a kind human being.

And why Johnson's personal truck? Well his original idea was to give away a Porsche Taycan, like the one his character drives in the film, though when he reached out to Porsche, they said "no," though according to Johnson, "I still said 'yes.'"