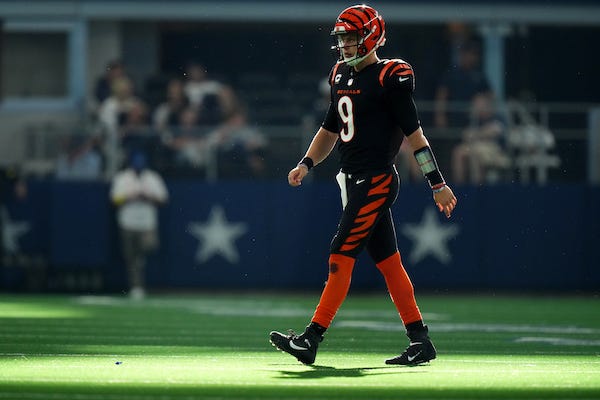 Cincinnati Bengals quarterback Joe Burrow walks to the huddle in the fourth quarter of a game against the Dallas Cowboys Photo credit Kareem Elgazzar-The Enquirer
By Alex Luckey, 98.7 KLUV

The Cowboys really shocked the football world last Sunday when they defeated the Bengals on a last-second field goal.

You can imagine how every member of the Bengals organization feels, especially quarterback Joe Burrow.

After the team’s incredible run to Super Bowl 56 last year, starting 0-2 is weighing heavy on the young QB, and the loss to the Dak-less Cowboys seems to be the final straw.

During a press conference, Burrow was asked about the rather harsh reaction online to the team’s 0-2 start. Burrow answered, “What's great is I don't have Twitter or Instagram right now, so I've seen none of it.

“We're focused on what's going on in here. I'm sure it's not a very good reaction, but I think it'll be a different reaction as we get going here."

Joe Burrow isn’t dealing with any of the social media backlash from the @Bengals 0-2 start because he’s not using social media right now. Instead of scrubbing the team like so many did this odd season he scrubbed social media. pic.twitter.com/Bw41Iie8Kl

Though if you ask Burrow,  it maaaay not have been because of the Cowboys loss that he deleted all his social media.

According to CBS Sports, Burrow said that deleting his social media apps wasn't a recent development, and that. they have been off his phone for "a while."