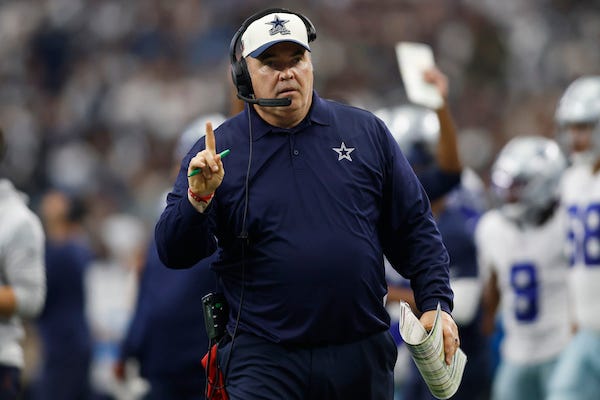 Dallas Cowboys head coach Mike McCarthy signals that the ball is on the one yard line in the third quarter against the Detroit Lions at AT&T Stadium Photo credit Tim Heitman-USA TODAY Sports
By Alex Luckey, 98.7 KLUV

While we’re sure he received plenty of praise and adulation from the team, McCarthy probably enjoyed one bit of acknowledgement more than all the others: the one he received from his daughter.

NFL reporter Jori Epstein tweeted a picture of the surprise McCarthy came home to, a handmade poster from McCarthy’s daughter Izzie congratulating her dad on his 150th NFL win!

Cowboys’ 40-3 win over Vikings marked Mike McCarthy’s 150th career win as an NFL head coach. He arrived home to this poster from his daughter Izzie👇🏽 pic.twitter.com/M2BL89490v

Izzie said it best: “Cowboys 4 ever!”