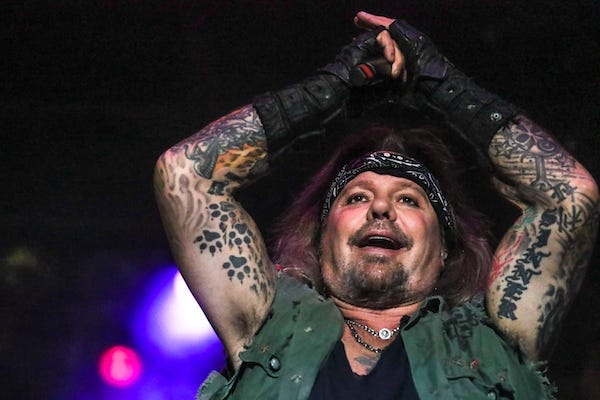 Last Friday, Vince Neil was performing at the Monsters on the Mountain music festival in Pigeon Forge, Tennessee with his solo band when he slipped and fell off the stage.

That explains why I lost track of him in this video. I apparently captured the fall at the end of this clip. Totally agree that he looked great and was singing great. Hope the X-rays are clear and you bounce back quickly @thevinceneil pic.twitter.com/jfWT6c3rVb

The band finished the song and then carried on playing a Led Zeppelin cover, according to fan Darrell Jenkins, who shot video of the incident.

Neil was actually hurt by the fall according to his bass player Dana Strum, who said per CNN, "The truth is Vince fell and broke ribs when he fell. He can't breathe and he's gonna get dealt with medically."

Neil has not posted anything to his social media regarding his current condition.

He and Motley Crue are scheduled to hit the road next June for a stadium tour with Def Leppard, Poison, and Joan Jett and the Blackhearts.